Get the app Get the app
Already a member? Please login below for an enhanced experience. Not a member? Join today
News & Media Don't ask, don't tell: Area 51 gets airport identifier

Pilots avert your eyes! The airport identifier and location of Nevada’s Groom Lake—you know, where they keep the space aliens at Area 51—has been appearing in flight-planning software and on handheld GPS receivers for most of the past year as KXTA (standing for what, extraterrestrial?).

“We already know and it doesn’t matter,” said a public affairs official at Nellis Air Force Base.

The Jeppesen FliteStar flight-planning program and AOPA's Real-Time Flight Planner even identify it as Homey Airport and add, “Private, VFR, No Fee, Customs Info Unavailable.” Well, there’s a fee. The airport is deep within heavily restricted airspace, guarded by fighter jets. First come the legal fees, the probable confiscation of your aircraft, and a personal fee in the form of jail time.

AOPA editors found KXTA clearly marked on a handheld GPS map drawn from an outdated August 2007 database. Runways are described as Runway 12-30, 5,420 feet by 120 feet, and Runway 14-32, 12,000 feet by 200 feet. That’s not quite true. One end of 14-32 continues across a dry lakebed for another 11,000 feet, but that portion is closed and partially covered with blowing sand. And there are four additional runways marked in the sand of the dry lakebed. 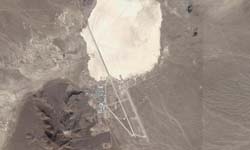 How do we know that? A picture of Groom Lake has been on Google Earth for years and the latest time stamps show it was updated in 2007. Photos of the place have been shown publicly since the late 1980s.

Groom Lake was outed by the Clinton Administration, which admitted only that it exists after workers filed lawsuits, claiming their health was harmed by working there. That admission of the area’s existence became necessary to handle the case in court.

While it is highly unlikely that pilots would intentionally seek to end their flying careers by raiding Homey, we can’t say the same for student pilots who may have learned only yesterday what restricted airspace is. Students, KXTA does not make a good waypoint and it’s not your friend.