Get the app Get the app
News & Media Ryan PT-22: Not Just Another Pretty Face

The Ryan PT-22 is strong, tough, and reliable

More than 300,000 young, patriotic Americans volunteered to become military pilots during World War II. Most of them received their primary training in that beloved biplane, the Stearman Kaydet (the “yellow peril”). 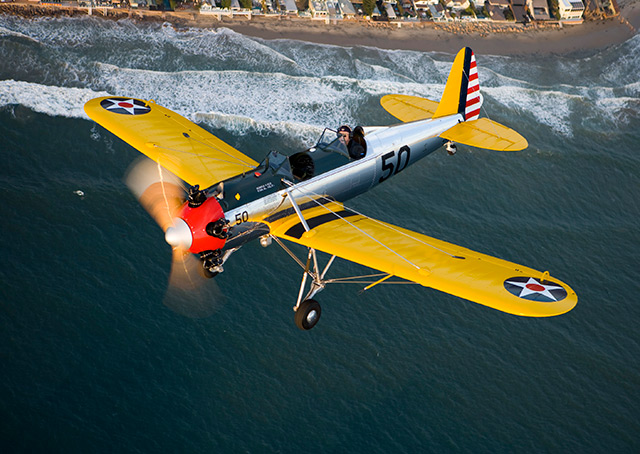 More than 300,000 young, patriotic Americans volunteered to become military pilots during World War II. Most of them received their primary training in that beloved biplane, the Stearman Kaydet (the “yellow peril”). The rest were trained in the Fairchild Cornell and the Ryan STA-3KR Recruit, the PT-22.

Although the Ryan was not as successful (in terms of numbers built) or as well known as its competitors, proponents of the PT-22 claim that it was the superior trainer because it was more demanding and less forgiving. The Stearman and the Fairchild, they claim, were pussycats by comparison.

The PT-22 shown on these pages, NC53178 (serial number 1859), was built along with all of its sister ships by the Ryan Aeronautical Company at Lindbergh Field in San Diego, California. It made its maiden flight on February 5, 1942, and was drafted for military service at Visalia (California) Army Air Field.

The PT-22 was retired from the military and began its civilian career at the end of World War II.

Subsequent years took their toll on NC53178, and the airplane eventually became a basket case. In 1992, Greg Heckman came to its rescue and purchased the derelict aircraft for $11,000.

Heckman, a research-and-design engineer, had been assisting in the restoration of warbirds for Pride Aircraft in Rockford, Illinois. He had always had a fascination for these historic aircraft and wanted to restore one for himself. Unable to afford a World War II fighter, he opted instead to restore a trainer. Because of his fascination with the Spirit of St. Louis, he had always been fond of Ryan airplanes, and this led to his selection of a PT-22.

Heckman obtained a copy of the Recruit’s design and manufacturing plans from the Smithsonian National Air and Space Museum. He then devoted four and a half years and 2,300 hours of painstaking, hands-on work (excluding time spent on research and tracking down parts) to the effort while paying strict and meticulous attention to detail.

This Recruit made its second maiden flight on May 6, 1998. This was in time for Heckman to enter the competition at EAA AirVenture 1998 at Oshkosh, where he was justly rewarded. The judges decreed that NC53178 was the Grand Champion Antique. It has been described as “the finest PT-22 ever built by Ryan or anyone else.”

This magnificent machine caught the eye of Terry Ballas at Oshkosh during AirVenture 2002. He fell in love with the trainer and eventually bought it from Heckman.

Ballas discovered, however, that a stock 1942 airplane has unacceptable limitations when operating in and out of controlled airports in major metropolitan areas during the twenty-first century. To the dismay of purists, he made certain modifications that included:

The result is what in the automobile industry is called a resto/mod, a restoration modified to take advantage of technological improvements. Some claim that this contaminates the original design and reduces its value.

Ballas’ Recruit is likely the most beautiful airplane I have ever flown. Its bright yellow wings are mated to a slim, polished-aluminum fuselage. Overall, it has a sexy, sassy, inviting appearance.

Immediately ahead of the front cockpit on top of the nose is a turnover mast designed to act like a roll bar and protect the occupants should the airplane wind up inverted on the ground, although I question its effectiveness (especially on sod).

Ahead of the mast is a glass tube, a sight gauge with a float that reliably indicates fuel remaining in the 24-gallon nose tank.

The baggage compartment is accessed through a small door on the left side of the fuselage behind the rear cockpit and is placarded for a maximum capacity of six pounds. The handbook, however, says that 53 pounds may be carried there when the front cockpit is empty.

The Kinner radial is a dry-sump engine, and its oil tank is between the engine and the fuel tank. Oil supply on this PT-22 normally is turned off if the airplane is not going to be flown for a while. This prevents oil from seeping into the lower cylinders and creating hydraulic lock. A panel on the left side of the cowling is removed to ensure that the in-line supply valve is open prior to engine start. This also is where the primer is located, so give it a few squirts before starting.

Heckman’s masterpiece is so immaculate that it is difficult to climb aboard for fear of soiling or scratching something. (One cannot find as much as a fingerprint on the shiny aluminum fuselage.) But I forced myself to overcome this fear and happily lowered myself into the rear cockpit. Solo flight is not allowed from the front although there are sufficient controls and instruments there for an instructor.

The seats adjust vertically and the rudder pedals can be adjusted fore and aft like most military airplanes.

Some PT-22s had direct drive starters. Someone standing behind the propeller rotated a hand crank that turned the engine and, hence, the propeller. NC53178 does not have such a starter nor is handpropping required. Simply depress the starter button, spin the propeller two or three revolutions, and turn on the mags.

The Kinner crackles and pops, and the sound is somewhat magical, strangely and inexplicably satisfying, reminiscent of another time. As expected, S-turning is required to see ahead while taxiing and downwind rudder is applied to prevent weathervaning into a crosswind.

There is nothing unusual about the flaps-up takeoff other than the gathering sense of impending adventure as speed increases and the outside air begins to curl around your head and take you gently into its womb. There is no joy like that of an open cockpit.

The Kinner radial normally feels a little rough during flight, as if running on four cylinders instead of five, and has a distinctive sound: pockety, pockety, pockety. It seemed strange that the engine sounds differently when leaning one’s head to the left than when leaning right, but I soon discovered why. Exhaust from the two cylinders on one side exits loudly from two short stacks, while exhaust from the two cylinders on the other side flow through a carburetor-heat muff and exit that through a single stack. So you hear the barking of a Kinner on one side and a somewhat muffled sound on the other.

As expected, in-flight visibility is wonderful, much better than an open-cockpit biplane flown from the rear (especially a Stearman). 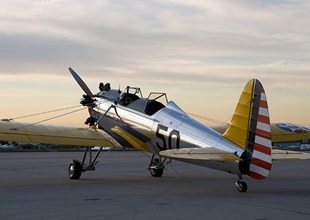 Ryan made extensive use of ball bearings to help make the flight controls smooth, light, and sensitive. Stalls and recovering from them are honest and straightforward, and there is ample pre-stall buffeting to warn of an impending stall. An observant pilot will notice, too, that the upper left flying wires begin shaking shortly before buffeting begins.

Be careful, though, not to let the ball out of its cage at high angles of attack. The Recruit is intolerant of sloppy footwork, not unlike many aircraft of that era, and rewards the errant pilot with a spin. The PT-22 loves to spin and will do so enthusiastically and with little incentive. It spins rapidly and at a relatively steep nose-down attitude, which must have unnerved students training to be military pilots.

Standard spin-recovery techniques are effective, but one must be careful not to be ham-fisted and induce a secondary stall during the pull-up—or hold opposite rudder too long during recovery and wind up spinning in the opposite direction.

Applying bottom rudder during a tight, slow turn from base to final can lead to a spin without any warning whatsoever. Some attribute the PT-22’s spirited willingness to spin to the four-degree wing sweep of the leading edges, but I have been unable to confirm this.

The PT-22 reputedly tends to spin flat with a rear center of gravity (when the front seat is empty), although I did not notice such a tendency. The airplane is limited to three-turn spins, so perhaps flattening develops if the spin is held much longer. With limit load factors of plus 7.6 and minus 3.5 Gs, you can perform almost any aerobatic maneuver for which you have the skill and desire. Snap rolls, however, are the PT-22’s forte and are a joy to perform. An entry speed of 90 mph seems best, although a little less airspeed reduces entry loads. The airplane flicks around quickly and can be arrested with ease.

Gliding flight, however, is not one of the airplane’s strong points. Power off at the best glide speed of 85 mph, it comes down more steeply than one would expect from a trainer. It is best to approach with plenty of altitude or carry power during shallow approaches.

Landing the PT-22 is unexpectedly easy. The trunion (knee-action) landing gear incorporates long-stroke Aerol (air-oil) oleo struts that soak up any tendency to bounce. It is difficult to make a hard landing in the Recruit. It simply squishes onto the ground during either three-point or wheel landings.

Do not, however, allow this to lead to overconfidence and complacency. The PT-22 is one of those airplanes that helped give taildraggers a bad reputation. Although the touchdown is easy, hang on. This is when the fun begins. Inattentiveness, or overcontrol of the rudder, during the ground roll can lead to a wicked ground loop, especially if you are flying alone and the CG is aft. If your feet are not busily and adroitly dancing on the pedals, then you’re probably doing it wrong. PT-22s have steerable, full-swiveling tailwheels.

As soon as I shut down the engine, John Montalvo pounced upon the airplane to clean up oil streaks and polish away any marks that I might have left on it. He took great pride in preserving the airplane’s pristine appearance.

Ryan Aeronautical entered the trainer market in 1934 with the Ryan ST (sport-trainer), progenitor of the PT-22.

The ST was a sleek and sexy machine partly because its narrow, inverted, in-line, 95-horsepower Menasco engine fit into a slender cowling that melted gracefully into the long, shiny-aluminum fuselage. The result looked as much like a sculpture as it did an airplane.

The airplane became the Ryan STA Super Sport when horsepower was increased to 125; the Ryan STA Special had a 159-horsepower, supercharged Menasco engine.

A Ryan STA was sent to the U.S. Army Air Corps in 1939 and was called the XPT-16, the first monoplane acquired by the AAC. Fifteen more were requested and called YPT-16s. Thirty more were delivered as PT-20s.

General Henry “Hap” Arnold, however, was displeased with the Menasco engine’s reliability and suggested that it be replaced with the more robust Kinner engine even though the five-cylinder radial disturbed the beautiful lines of previous models. Ryan delivered 100 of these PT-21s.

During 1941 and 1942 the Army Air Corps (and Army Air Forces) ordered 1,023 of Ryan’s wire-braced monoplanes with improved Kinner engines and without landing-gear fairings (for ease of maintenance). The result was the Ryan PT-22 ST-3KR. The Navy also ordered 100 of them (designated as NR-1s).

Although not as pretty as previous STs, the PT-22 made up in strength and reliability what it might have lost in sex appeal.

The PT-22 and the STA are closely related, but the Recruit is not an STA with a radial bolted on the nose. The PT-22 was designed as a military airplane. Its fuselage, for example, has a circular cross-section to accommodate larger pilots while the STA has a shapelier, oval fuselage.