Get the app Get the app
Get the latest news on coronavirus impacts on general aviation, including what AOPA is doing to protect GA, event cancellations, advice for pilots to protect themselves, and more. Read More
Already a member? Please login below for an enhanced experience. Not a member? Join today
News & Videos Famed Alaska bush pilot, Ellen Paneok, dies

By Nathan A. Ferguson 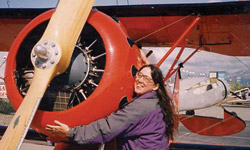 Alaska aviation pioneer and author Ellen Evak Paneok, who used to chase polar bears off runways in the line of duty—among other exploits—has died. She was 48.

Paneok succumbed to hepatitis C on March 2 at the Alaska Native Medical Center in Anchorage. She was recognized as the first Native woman bush pilot.

Paneok was born on Oct. 17, 1959, in Bedford, Va., although she was raised in Anchorage. When Paneok was 16, she received a $1,500 dividend through a Native Corporation, set up to settle land and financial claims between the U.S. government and indigenous groups. She put the money toward learning to fly.

Rocking on the Delta

With Trusting Eyes Behind Me

By the time she was 23, she had her commercial and flight instructor certificates. In 1983, her first flying job was in Kiana, flying a Piper Cherokee Six. In her 17 years as a commercial pilot in Alaska, she had ferried everything from dynamite to live wolverines, the U.S. mail, passengers, and medical patients. She had more than 15,000 hours by the time of her death.

Paneok was published widely in such magazines as AOPA Pilot and Alaska Magazine and was mentioned in numerous books. She was one of only 37 pilots featured in the “Women and Flight” exhibit at the Smithsonian National Air and Space Museum in Washington, D.C.

“Ellen’s beautiful prose and clever story-telling ability combined with her unique perspective on flying resulted in some wonderful articles for AOPA Pilot. Members enjoyed and appreciated her contributions, and we will miss hearing from her,” said Tom Haines, the magazine’s editor in chief.

Paneok was also active in several organizations, including The Alaska Ninety-Nines and the Alaska Airmen’s Association. She spent much of her free time volunteering for Big Brothers Big Sisters of Southcentral Alaska and inspiring youth about how the sky offers limitless possibilities.