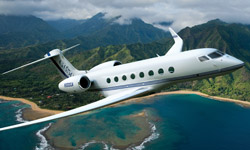 The largest Gulfstream ever, the G650 is likely the first of a new class of business jet offering transoceanic range and cruise speeds approaching Mach 1. It is yet to be seen what the General Dynamics unit’s main rivals in this market—Canada’s Bombardier and Dassault of France among them—will offer in response.

“Certainly there is no competition for the G650 now or in the immediate future,” said Joe Lombardo, Gulfstream Aerospace president, speaking to news media March 13 at the unveiling of a G650 model and cabin mockup at the company’s Savannah, Ga., facility.

“We see it as the first of the ‘ultra-ultra’ class—this stands for ultra large cabin and ultra long range.”

The G650 is slated to fly 7,000 nautical miles at 0.85 Mach, or 5,000 nm at 0.90 Mach—a significant improvement over the current Gulfstream flagship, the G550. The new design will have a maximum operating speed of 0.925—a hair faster than civil aviation’s current speed champion, the Cessna Citation X.

Lombardo said the G650 would be initially priced at $58.5 million, with service entry planned for 2012. While no launch customer was named, Lombardo sees immediate demand for 35 to 40 aircraft, and a new production facility in Savannah will accommodate a build rate of 90 aircraft per year.

Gulfstream is opting for conventional aluminum construction for most of the G650’s structure but with extensive use of metal bonding instead of riveting. Composite materials are planned for the winglets, tail section and other key components, however, with construction slated for Stork Fokker in The Netherlands.

Not only will the G650 retain Gulfstream’s signature elliptical fuselage windows; they will be 16 percent larger and more numerous (two more) on the new aircraft. “Our customers said, ‘whatever you do, don’t get rid of those windows,’” said Pres Henne, Gulfstream’s senior vice president of programs, engineering, and test.

G650 power will come from a pair of Rolls-Royce BR725 turbofans; a family of new engines in the 16,000-pound thrust class. First test runs of the BR725 are expected within a month, Gulfstream said, and plans are to produce the engine at the Rolls-Royce Germany plant near Berlin.