Get the app Get the app
News & Media Turbine Edition: Single-Pilot Safety

The risks of riding solo

There are a number of reasons why turbine flying is safer than operations involving piston-powered airplanes. For one, turbine pilots usually attend thorough, structured, simulator-based training designed around the type of airplane they’ll be flying; after all, insurance companies require it in order for pilots to be covered.

There are a number of reasons why turbine flying is safer than operations involving piston-powered airplanes. For one, turbine pilots usually attend thorough, structured, simulator-based training designed around the type of airplane they’ll be flying; after all, insurance companies require it in order for pilots to be covered. In addition, turbine powerplants, owing to their comparative simplicity of design, are more reliable than piston engines. Then there’s a recency-of-experience factor at work. Many turboprop and turbofan airplanes serve in air taxi, charter, fractional, and cargo-hauling fleets. This means that their pilots fly on a regular basis.

But to be more specific, what about single-pilot turbine operations? Has the record shown that single-pilot (SP) flying is more risky than flights with two-pilot crews? In a word, yes. Robert E. Breiling Associates, an accident analysis firm based in Florida, has been compiling accident data on turboprop and turbofan airplanes since the 1960s. Breiling’s annual compilation of business aircraft accidents has become a standard reference tool in the business aviation community.

Breiling gets his data from the FAA, the NTSB, aviation underwriters, AvData Inc., and manufacturers. Using reported active fleet sizes, fleet hours flown, and accident categories, he draws his own conclusions about the status of business aviation safety. His annual review of 2007’s business turbine accidents was published in June 2008. This represents a more timely accident review than that put out by the NTSB, which can take two years or more to finalize its accident data.

What follows are his deductions concerning the comparative statistics between single-pilot and two-pilot accidents—for both turboprops and jets.

Breiling has determined that 78 percent (41 accidents/incidents out of 71) of the 2007 U.S. mishaps involving turboprop aircraft certified for single-pilot operation took place while the aircraft was flown by one pilot. What’s more, he says that, over the past 10 years, 73.6 percent of all turboprop accidents involved single pilots. Yet a fleet survey shows that about 62 percent of the total turboprop fleet are SP-operated.

We can get an idea of the single-engine turboprop accident situation in a separate study Breiling performed. The accompanying chart shows the estimates for the U.S. and Canadian fleet of selected airplanes. 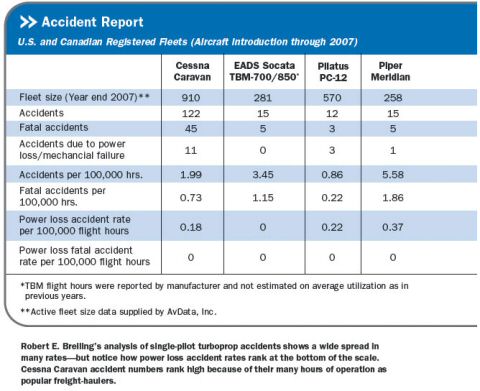 Pilot action (or inaction) was blamed for 45 percent of all business turboprop accidents in 2007, so there’s nothing really surprising there. What is of concern is that the factors contributing to 28.2 percent of accidents involved mechanical, maintenance, or manufacturer design problems—with landing gear system malfunctions leading the pack. Airport and runway conditions, plus unknown causes, round out the list of 2007 probable causes.

The biggest SP-certified fleets in this category belong to several of the Cessna Citation types, including the Citations 500, I/SP, II/SP, the CitationJet series, and the Mustang. Next come the Hawker Beechcraft Premier I and IAs, followed by the Eclipse 500 jet.

Breiling says that it’s difficult to identify the number of SP-certified jets actually being flown single-pilot because many SP jets are bought SP-certified to enhance resale value, but are seldom flown that way. Insurance underwriters and training firms give widely varying estimates as to how many such jets are flown single-pilot, so it’s hard to know what the SP accident exposure rate really is.

The Premier I and IA airplanes—both of which are SP-certified—have had seven non-fatal accidents since their introduction in 2001, all of them in the landing phase. Many involved runway overshoots where ground spoilers failed in early models.

The problem with the latest phenomenon—light jets and very light jets (VLJs)—is a lack of data. The fleets of these airplanes are relatively small, and these airplanes haven’t accumulated enough time in service to produce meaningful data regarding accident types and causes. The Cessna Mustang, which went into service in 2006, had a fleet of 40 airplanes but only one (non-fatal) accident in 2007. This happened when a temporary registration number pasted over a fuel vent caused the fuel tank and wing to distort. The airplane landed without further incident. As for Eclipse jets, 81 were delivered in 2007, but no accidents were recorded until this year. Eclipses have been involved in several incidents, however. Most notable was a software malfunction that caused an engine to remain at full power after a go-around.

So while single-pilot-certified turboprops and jets continue to build in popularity, the statistics appear to confirm the notion that single-pilot operations create higher workloads and greater demands on pilot skill when the chips are down and stress levels run high. The old adage that two heads are better than one seems to hold true in turbine operations.

As for VLJs, the jury is still out. Perhaps by this time next year we’ll be able to identify some useful trend information based on bigger fleet numbers and higher utilization. But until then, prepare for the usual when it comes to any airplane accident scenario. The landing phase is consistently the most dangerous, with the IFR approach phase coming in a close second. And be sure the landing gear of your turbine airplane is well maintained.