Get the app Get the app
AOPA Members DO more LEARN more SAVE more - Get MORE out of being a pilot - CLICK HERE
News & Media Unintentional King Air pilot: An interview with Doug White 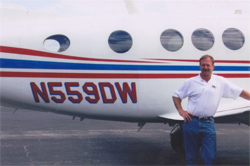 Doug White realized the only thing he could do was “Fly the plane.”

Doug White was having a tough week.

He and his family were returning home to Monroe, La., from Marco Island, Fla., where they had just attended his brother’s funeral.

White, 56, a private pilot with about 230 hours flight time in single-engine Cessna 172s sat in the right seat of a chartered King Air 200 with his wife and two teenaged daughters in the passenger cabin. White, owner of an equipment leasing company, had learned to fly in 1991 but set flying aside immediately after obtaining a private pilot certificate.

In January, he’d resumed flying and had logged 150 hours in preparation for an instrument rating he plans to earn this spring. Joe Cabuk, a charter pilot, was in command of the King Air during the Easter Sunday flight and guided it north from Marco Island.

“I’d only been in the King Air once before ,” said White who had recently bought the aircraft and leased it back to an air charter firm. “I was interested in listening to air traffic control and looking out the window and learning about the IFR system. And I don’t know why I did this, but I remember asking Joe what button to push to use the radio.”

Less than 10 minutes after departure, Cabuk was finishing the climb checklist, and the airplane was on autopilot. The aircraft was rising through a thin layer of clouds over the gulf when the former U.S. Air Force pilot was suddenly stricken.

“I looked over and his chin was on his chest,” White said. “He made a loud, guttural sound, kind of a groan, and his eyes rolled back, and his hands never left his lap. It was quick, it was sudden, and it was final.”

The airplane was climbing about 1,500 feet per minute, and White saw that 10,000 feet appeared to be selected on the autopilot display on the instrument panel. White anticipated the King Air would level off at that altitude, but it kept climbing steadily.

White pushed the radio transmit button and called Miami Center. “King Air Five Five Nine Delta Whiskey, I’m declaring an emergency,” he remembers saying. “I need to stop this climb, and I need a King Air pilot on the line.”

Controllers at Miami Center and Ft. Myers Approach got a qualified King Air pilot on the telephone and relayed information to White telling him how to disengage the autopilot and fly the twin-engine turboprop.

White clicked the autopilot off at about 17,000 feet and tried to level the airplane, but it was trimmed to climb and required an extraordinary amount of forward pressure on the yoke. White tried to trim the airplane using the manual elevator trim wheel, but it was partially blocked by the deceased pilot’s right leg. Once he got that task accomplished, ATC asked White to descend to 11,000 feet.

He reached out with his left hand and pulled the throttles back slightly.

“I didn’t know anything about torque or rpm settings,” he said. “I had an attitude indicator, an airspeed indicator, and a directional gyro in front of me, and that’s all I used to fly the airplane. The rest I didn’t pay much attention to.”

The King Air was travelling about 220 KIAS, and White started a left turn as directed by ATC.

He yelled for his wife Terry to come to the cockpit and let her know what was happening. He was concerned the deceased pilot might slump forward against the control yoke and asked her to try to remove him from the left seat. But there was no way she could lift his more-than-200-pound body from the cramped confines, so she tried to cinch his shoulder harness tight to keep him upright.

White told her to “pray real hard” with their daughters as he tried to land.

White had never flown any airplane from the right seat. He gradually descended to about 5,000 feet in clear air well out over the ocean as controllers guided him toward Fort Myers and its 12,000-foot-long Runway 6.

“I don’t know if they were getting everyone out of my way, or getting me out of everyone else’s way,” he said.

The King Air’s indicated speed varied between 220 knots and 140 knots as White made throttle adjustments. At one point he sought to re-engage the autopilot but changed his mind when it began to turn toward a pre-selected heading.

“Heck with that,” he remembers thinking. “I’m just going to hand fly.”

White saw the airport about eight miles away.

White lowered the landing gear and got three green lights. He added approach flaps then full flaps, and controllers warned him to avoid slowing too much. White remembers being surprised that there were only two flap settings. The Cessna he flies has four.

Automated warnings told him the plane was 500 feet above the ground, and White ignored a series of other cautions and alarms.

“There were buzzers, amber lights, horns: It was like a circus. The only thing I was concentrating on was keeping the airspeed up and the wings level. You know, just fly the plane.”

A large group of emergency vehicles had gathered near the runway, and White said he was surprised at the cluster of brightly blinking lights as the runway came into view.

The landing itself was one of White’s best.

“It was a greaser, to be honest,” he said. “It didn’t jump or skip. It just set down and stopped in 3,500 feet or less. I asked which taxiway they wanted me to use.”

The King Air was quickly surrounded by emergency vehicles, and White said he didn’t know how to stop the engines.

“I’m surrounded by cops, ambulances, and firemen in protective suits – and I didn’t know how to shut the plane down.”

He got advice over the radio and soon had the props feathered and the fuel supply cut off. His wife and daughters were shaken by the hour-long ordeal, but otherwise unharmed.

“My wife was shaking the whole time,” White said. “My baby squalled, and my 18-year-old threw up.”

White said he plans to finish his instrument training in the next few weeks, then get some experience in a complex, single-engine Bonanza before moving up to a piston twin such a Baron.

“Eventually, I’d like to fly the King Air again – but only with the proper experience and training,” he said.

White deflects praise for his handling of the emergency.

“He was a real professional pilot and a great guy,” White said. “If I could be half the pilot he was, I’d be tickled.”

ATC audio recording of the incident