Get the app Get the app
Already a member? Please login below for an enhanced experience. Not a member? Join today
News & Media Machado encourages prospective students 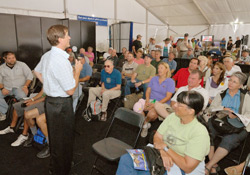 “When you learn something new, you become something new,” aviation author, humorist, and flight instructor Rod Machado told a standing-room-only crowd Aug. 1 in EAA’s Learn to Fly Discovery Center at AirVenture in Oshkosh, Wis. Flying is wonderful because you can do so much, he said. “There are so many places you can go.”

Machado described the experience of flying solo. “Solo is not a measure of altitude, it’s flying all by yourself,” he told his audience of prospective pilots.

A contributor to AOPA Pilot and AOPA Flight Training magazines, Machado spoke Friday and Saturday at the Learn to Fly Discovery Center, where AOPA and the National Association of Flight Instructors (NAFI) helped prospective students learn more about flight training. Visitors could get behind the controls of a Redbird FMX flight simulator; those thinking about flight training could subscribe to AOPA’s Let’s Go Flying e-mail newsletter. Students already training could enroll in AOPA’s Flight Path, an innovative program that lets a student track his or her progress online and includes a sweepstakes with cash prizes for flight training, and enroll as AOPA Flight Training members to receive six months of AOPA Flight Training—and other AOPA membership benefits—for free.

Machado asked his audience why they were interested in learning to fly and got several answers: For the sense of accomplishment. To take someone on a date. “I wouldn’t recommend running out of gas on that date,” he said to a chorus of laughter. To take someone flying and share aviation. “Getting a sport pilot license allows you to achieve that objective,” he said, explaining that a sport pilot certificate allows you to take one person with you, while a private pilot certificate allows the pilot to carry additional passengers.

Regardless of the pilot certificate sought, Machado said, a student can reduce the amount of training time needed by practicing with Microsoft Flight Simulator on a personal computer. “You can learn a lot about flying from that.”

He offered his audience several tips for success in flight training. “Nothing is more important to your success in becoming a pilot…than picking a good flight instructor,” Machado said. “A good instructor will help you over those learning plateaus.”

How do you find a good flight instructor? Machado asked. “You find a good doctor typically by recommendation,” he said. “Be a gumshoe for a little while. Go out to the airport and start asking some questions.”

Machado suggested posing the question, “What CFIs are students most satisfied with?” to the local designated pilot examiner. To make sure that, as a prospective student, you are compatible with a particular flight instructor, agree initially to take only three lessons, he said. That avoids the uncomfortable task of changing flight instructors when student and teacher are not a good match.

One of the things that scares student pilots the most is talking on the radio, he told the audience to another chorus of laughter. “Exposure is the key,” he said. “Listen to ATC online. Google ‘live ATC feed,’” Machado said, or buy a VHF radio receiver. “You listen to that for one hour, and that gibberish will begin to make sense.”