Get the app Get the app
Already a member? Please login below for an enhanced experience. Not a member? Join today
News & Media Seventy years later, still flying 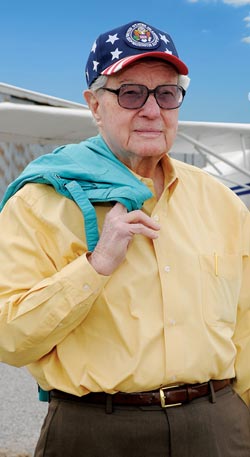 “I had saved $20—my total savings—and I said, ‘This is the day I’m gonna put a nickel in the city bus and drive out to the Wichita Municipal Airport,’” Foster said. Seventy years later, Foster is still flying.

He soloed after eight hours flying out of the grass field at Wichita; finished training in Kansas City, Kan.; and hasn’t left aviation since. Over the course of his long career, Foster has flown everything from fabric-covered biplanes to Boeing 737s. He trained cadets during World War II and managed a flight simulator maintenance program as the devices were being introduced to airline fleets. In his retirement, he worked to develop a mountain flying course that has introduced thousands of pilots to mountain flying.

Now, Foster swaps stories with flying buddies at the Enid Woodring Regional Airport restaurant in Enid, Okla., and still gives flight reviews and tailwheel training from time to time. He keeps his 1939 Luscombe 8A in Enid; he said he bought an airplane manufactured in 1939 because he feels an emotional connection with aircraft from the year he started flying. His eight logbooks—more than 23,000 hours—tell the story of 70 years of American aviation and the airplanes flown along the way.

From Kansas to the Pacific

Foster, 92, grew up in western Kansas during the “golden age” of aviation. He said he had wanted to be a pilot since he was 8 years old, when a barnstormer came through the area and landed in the family’s pasture. The pilot took off again before Foster and his brother could reach the airplane, but the incident sparked a passion in both of them.

He and his brother took their first ride in an airplane in the boom of the late 1920s, when barnstormers traveled the country after harvest time and sold airplane rides to farmers flush with profits from their crops. Foster said the Gates Flying Circus came to town and he and his brother climbed into a New Standard D-25 biplane with aerial performer Clyde Pangborn.

It would be another decade before Foster was able to take his first lesson. The onset of the Great Depression meant that Americans no longer had money to spare for airplane rides, and the Gates Flying Circus and operations like it shut down. Foster worked odd jobs after high school and eventually landed a job driving a freight truck between Denver, Colo., and Kansas City, Mo. The job paid $37.44 a week, enough to save up and learn to fly.

He earned his private pilot certificate in 1941 and bought a Rearwin airplane with some other pilots—a much different aircraft from the airliners he would fly later in his career. “That was back in the days when they just welded airplanes together and splashed fabric on them,” he said. By the middle of 1942, Foster had 165 hours, enough to qualify him for the secondary flight instructor’s course at the Civilian Pilot Training Program school in Lawrence, Kan. 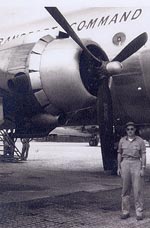 Foster flew four-engine C-54s across the Pacific during World War II. Shown here on Kwajalein Island on his way to Guam in 1945.

Leading up to American involvement in World War II, President Franklin Delano Roosevelt had created the Civilian Pilot Training Program to increase the number of pilots in the United States. Even after the attack on Pearl Harbor and American entry into the war, the nation had a shortage of qualified military pilots. Pilots who already had experience, like Foster, became instructors at the schools that had cropped up across the country. Foster and the others in his class continued their training at the Army Air Corps training center at Randolph Field in Texas before becoming civilian instructors to train pilots for the war.

“We in our junky automobiles headed like a swarm of turtles to San Antonio,” Foster said. After Randolph Field, Foster instructed cadets in Corsicana, Texas, for about a year. In December 1943, he reported to Denver to train for a new job with United Airlines. He trained in a gull wing Stinson before moving on to the DC-3.

“The first time I looked at that, I wondered how in the world a guy from the farm could ever fly that,” he said. But the airplane proved to be easier to handle than he anticipated. Soon after, Foster was racking up four-engine time over the Pacific Ocean in a C-54.

Foster flew the trans-Pacific flights in an air transport command for the military. He recalls one particular trip when he flew from Guam to Manila shortly after Allied troops had driven the Japanese north from that spot, landing on a makeshift runway of panels laid on the bomb-torn ground. The tower, he said, was a man at the Y of a tree looking out over the field.

On the way home from California for Christmas in 1945, Foster got a piece of steel lodged in his left eye while doing maintenance on his car. He thought he was fine after the steel was removed, but on an evening flight from Boston, he looked up to tune the automatic direction finder (ADF) in the ceiling and could not see out of his left eye.

Foster went on sick leave and found a doctor at Northwestern University to extract a remaining piece of steel from his eye. He obtained a first-class medical waiver from the FAA, but ran into trouble when it was time to upgrade to captain in the DC-3.

He got his papers to go to Denver for training to become a captain with United Airlines. But his files had to be approved by the medical department first, and the airline would not approve him to fly as captain. “So my buddy, a guy by the name of Nelson, he went to Denver,” Foster said. “… And I was heartbroken. And I kept those papers.”

Foster continued flying as a copilot; but even with top-notch reports and recommendations from his chief pilot, it was clear he would not advance to the position of captain. He decided to try something else. 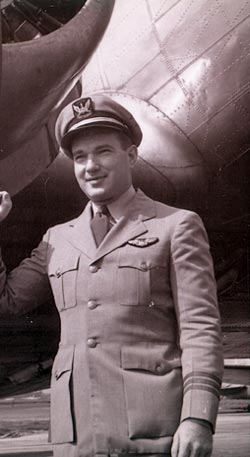 Foster was a copilot for United Airlines, eventually earning the rank of captain in spite of an eye injury.

He moved back to Kansas with his wife and daughter and took nonaviation jobs for a while, but business ventures didn’t work out. When he heard of a charter pilot job opening up in Manhattan, Kan., in 1950, he jumped at the chance. He hauled soldiers from Fort Riley in a Lockheed 10A and other aircraft, instructing at a G.I. flight school when he wasn’t flying.

“We just flew the wings off all those airplanes,” he said. “… I had more doggone mechanical problems and scares than you can imagine.” But because of his training with United Airlines, he said, “I was able to pull out of the hole each time, and I never scratched that old airplane.”

One afternoon in late 1954, Foster got a call from a friend at United Airlines. He wanted Foster to come back to Denver to instruct at the United training center. “I said, ‘I’ll take it,’” Foster recalled.

While at United, Foster became the manager of flight simulator engineering and maintenance. The airline had only recently begun to employ the devices as a major part of flight training, and Foster developed diagnostic procedures for maintaining the machines as they evolved more and more sophisticated visual displays. He returned to instructing in 1972, and he began instructing in the Boeing 727 and 737.

It was back at United that Foster finally had a chance to obtain his air transport pilot certificate. His supervisor authorized the training, and although he never got a chance to fly the line, he qualified for captain. He retired June 30, 1984.

Parallel to his airline career, Foster was always instructing in small airplanes. He has instructed in 114 makes and models of GA aircraft, and he didn’t stop when he retired. In fact, he stepped up his involvement in GA. He was elected president of the Colorado Pilots Association in 1985 and helped found that organization’s mountain flying course, which still guides pilots through the peaks of Colorado. He even wrote a textbook to accompany the course. 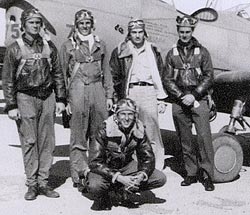 Foster, second from right, taught aviation cadets at Corsicana Army Base in Corsicana, Texas. Shown here in October 1942 with his first class of cadets.

Foster said he has written two books, the other a compilation of stories about “flying in the real world”—in the unexpected or hazardous conditions a career pilot like Foster can find himself. Foster recounts the stories from his life with an easy recollection and is eager to share his experiences. He passed down his love of flying to his son, a Navy commander whom he calls “the real pilot in the Foster family.” Two grandsons are now in military pilot training. For the seventieth anniversary of his first lesson, Foster made plans to have lunch with flying buddies.

“I got to spend my life doing what I decided I wanted to do when I was 8 years old,” he said. “The flying business has been so good to me, I wanted to give something back.”