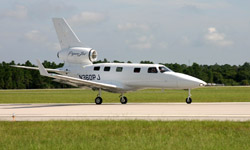 A new variable thrust vectored nozzle will simplify life for Piper Aircraft engineers and manufacturing staff. The nozzle, developed by engine manufacturer Williams International, improves the handling characteristics of the single-engine jet and allows Piper to change the tail from a trimmable-horizontal to a fixed-horizontal stabilizer, saving weight and simplifying manufacturing.

The nozzle is passive to the pilot, but by using the Coanda effect, the nozzle changes the direction of the thrust slightly depending on power setting—keeping the nose from pitching down dramatically during high power applications, but allowing the exhaust to efficiently exit directly aft during cruise flight when power is naturally lower at altitude.

The PiperJet proof of concept airplane has accumulated about 200 hours over 130 flights. It has been tested to a MMO/VMO of 250 KIAS/Mach 0.55. Cruise speed so far on the POC is 253 knots true, meaning that the aerodynamically cleaner production airplanes will easily achieve the planned 360 knots, according to Kromer. The airplane is also expected to achieve its NBAA range of 1,300 nm and already climbs to FL350 in 22 minutes. Aerodynamic changes on production airplanes will likely eliminate the need for a stability augmentation system and yaw damper.

Piper holds more than 200 orders for the jet. It expects to announce in October a new timeline for the project, likely pushing first deliveries later than the planned early 2012 date.