Get the app Get the app
Already a member? Please login below for an enhanced experience. Not a member? Join today
News & Media Celebrating AOPA - in corn 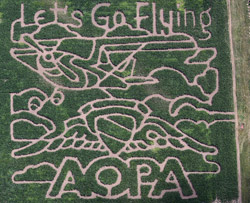 Sharing your love for aviation starts with a simple invitation: “Let's go flying!” And the Richardson family, owners of Richardson Farm in Spring Grove, Ill., has shared its love of flying in a big way this year—with a five-acre “Let's Go Flying” corn maze celebrating AOPA's seventieth anniversary.

The farm, owned and worked by three generations of the Richardson family, has been drawing visitors to explore its corn mazes since 2001. Design themes—seen best from the air—have included the centennial of flight, Chicago-area baseball, the 200th anniversary of the Lewis and Clark expedition, and the election-year “Race to D.C.” This year, the larger, 28-acre maze honors the life of Abraham Lincoln; and, with five pilots (and counting) in the family, it seemed appropriate to use the smaller field to celebrate the AOPA anniversary.

“Flying is kind of near and dear to our hearts, so we wanted to celebrate that,” said Robert Richardson, one of the owners of the farm. Robert's father, the patriarch of the family, no longer flies, but he has passed his love of flying—and his farm—on to his children. Today the family owns a Cessna 182 as well as a Cessna 150 used mostly for training.

The “Let’s Go Flying” design displays the AOPA insignia and an airplane, with the slogan “Let’s Go Flying” at the top. Visitors can wander through the two miles of trails and look for checkpoints as they work their way through.

Robert said the family decided to add the annual corn mazes to the farm in 2001, when it had gotten harder and harder to make a living raising pigs and it became evident the business would have to try something different. “It seemed like an interesting idea because we already had a cornfield—that’s half the battle,” he said.

The Richardsons hired a maze designer and put up signs to advertise. Business started out slow, but “by October, people were just going all the time,” Richardson said. The business expanded to offer other facilities for family activities, including a picnic area, a 50-foot slide, and wagon rides. Now the farm boasts the largest corn maze in the world, based on miles of trails, he said.

The farm has about 200 acres of corn, 200 acres of soybeans, and a Christmas tree farm, Robert said. To create the maze, workers first cross-plant rows of corn to form a dense stand; and in late June the maze designer, Shawn Stolworthy of Great Adventure Corn Mazes in Idaho, tills trails in the cornfield using a GPS. Visitors can’t see what the design looks like from the ground, but pilots overhead have an ideal vantage point. Richardson said Westosha Airport (5K6) in Wilmot, Wis., and Galt Field (10C) in Greenwood, Ill., are both nearby.

“Every once in a while someone will stop by and say, ‘We flew over it a week before and want to come see it by the ground,’” he said. He said it’s not uncommon to see a plane fly overhead and come back for another look at the unusual fields.