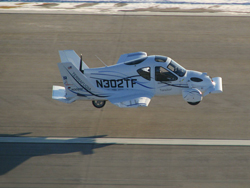 You may not have noticed it, but history was made on March 5 at 7:40 a.m. when the Terrafugia Transition lifted off the runway for the first time at New York’s Plattsburgh International Airport. The Transition is the first “roadable airplane” that is completely self-contained in ground mode; previous attempts at flying cars required the wings or other components to be trailered on the ground.

At a press conference at the Boston Science Center March 19 announcing the first flight, Chief Test Pilot Phil Meteer demonstrated how the airplane switches to road mode in just 30 seconds as the wings fold in the middle and bend upward at the root, collapsing up next to the fuselage behind the two-person cockpit. To change back to aircraft mode, the pilot must enter a personal identification number into a keypad next to his left knee—a level of security to prevent someone from stealing the car and attempting to fly it.

Terrafugia CEO Carl Dietrich described the anxious moments on March 5 as the Transition barreled down the 11,000-foot runway at Plattsburgh and lifted off, followed by a Cessna 172 chase plane flown by volunteer formation pilot Giora Guth and John Telfeyan. “We felt as if we had planned for every contingency, but at that moment all we could do was watch,” Dietrich said. As planned, the airplane flew only a few feet above the long runway before landing again. Phase one of the flight test plan includes a series of such runway hops, to date as high as about 70 feet. Meteer so far has logged seven landings, saying the four-wheeled (front-wheel drive) craft lands conventionally. Pilots will love the feel of the Transition while taxiing, he said, because of the automotive-style suspension. “We built it to withstand Boston-style potholes,” he quipped. The flight tests followed months of high-speed taxi tests and thousands of hours of wind tunnel and simulator sessions.

Designed as a light sport aircraft, the first Transitions are scheduled to be delivered in 2011 with a sales price of $194,000. Refundable production positions can be reserved now for $10,000. The Transition is powered by a 100-hp Rotax 912S engine in a pusher configuration. In the ground mode, the propeller, which is nestled between twin vertical stabilizers, is stopped. The engine is optimized to run on high-octane auto fuel, but it can also burn 100LL avgas.

Look for more information about the Transition in the May issue of AOPA Pilot.