Israeli diplomat does the "wing thing" 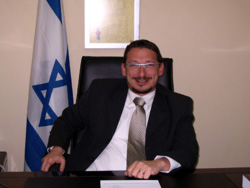 When Chuck Kane, like every incoming Israeli diplomat, had to Hebraicize his surname, he drew on his love of flying.

The immigrant from New York selected Kanafi because it evoked his ancestors’ original surname of Knefski and played off the Hebrew word kanaf (wing).

“I liked it because of the ‘wing thing,’” said Kanafi.

A general aviation pilot for two decades and an AOPA member since 1995, Kanafi has “converted and validated my way across the globe” on assignments to Zimbabwe, Germany, Eritrea and now Turkey, where he serves as deputy head of mission at Israel’s embassy in Ankara.

All diplomats must learn the lay of the land to which they’re dispatched, but Kanafi also studies each country from the unique vantage point of the air.

Unique? How about flying over elephants, impalas, and buffalo in Zimbabwe—and it not being considered odd?

“For one airstrip I flew to, the printed procedure said that I should make a low path over the airstrip to scare off the elephants and then circle back around,” Kanafi related by telephone recently over the din of an Israeli Independence Day celebration at a colleague’s house. “The fact that it’s officially enshrined in the aeronautical charts—you think of them as hi-tech and precise, and then you see an instruction saying, basically, ‘Scare the elephants off the runway’—gives you an insight that it’s not strange [but is] right and completely normal.”

Taking in Zimbabwe from above also offered a valuable peek into ethnic distinctions, Kanafi said. Villages near the capital, Harare, featured the rectangular homes of one tribe, but the architecture shifted to the circular style of another tribe as Kanafi headed southeast toward the mountains.

In Germany, Kanafi was struck by the population density, which he said he otherwise would not have gleaned “by driving hours on the Autobahn.” While there, he did touch and goes at Berlin’s historic Tempelhof Airport (now closed) and flew over an enormous blimp hangar.

Kanafi also joined German aviators at an informal gathering. One man was a former Luftwaffe pilot—an unsettling experience, to be sure.

“It was great to hear old-pilot stories. On the other hand, it’s a guy who was fighting for the Nazis and was, in some way, implicated,” said Kanafi, whose maternal grandfather was among relatives killed during the Holocaust. “I don’t think I wanted to talk to him.”

Kanafi flew very little in Eritrea, primarily because of the country’s fuel shortages and dearth of single-engine aircraft. However, he takes delight in having received private pilot certificate No. 002 and knows the American who snagged 001. 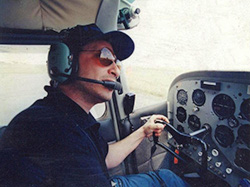 Zimbabwe offered a “flyer’s paradise,” Kanafi said, because of the perpetually clear days and well-developed infrastructure left from the British colonial period.

Aviation is an uncommon avocation for diplomats, so Kanafi’s piloting experience is an effective icebreaker. He’s taken Israeli colleagues in the air, and sometimes other ambassadors, too. The latter often ask about Israel’s legendary air force or other aspects of the country. “It can be a sort-of bonding experience,” he said.

As a boy in Queens, New York, Kanafi became enamored with flight on visits to an amusement park near Flushing Airport. His home’s being situated below the approach to LaGuardia Airport also played a role.

“The noise was pretty attractive,” he said. “The way a plane looks when it turns from base to final—it just looked incredibly cool.”

Not until Kanafi moved to Israel, though, did he consider flying. He took lessons in a Cessna 172 at Herzliya Airport, near Tel Aviv in the country’s center. Aloft, he understood visually what he knew intellectually: that Israel is tiny. “As soon as you’re in the air, you can see snow on the Hermon,” he said of the mountain in Israel’s northeast corner.

Kanafi has not yet flown in Turkey, but will. While posted there, he also hopes to fly to neighboring Bulgaria and Cyprus.

With all his licenses and certifications, Kanafi, ironically, has not earned his Israeli pilot’s certificate. The conversion process is complex, and Kanafi will have to pass a six-month course and multiple examinations.

Israel’s GA scene is fairly undeveloped, with most GA pilots being air force retirees, Kanafi explained. Most airplanes appear to be ultralights. “The Cessna and Piper scene is quite small,” he said.

Kanafi’s wife Sharon promised that after paying off their mortgage, he could look into purchasing an airplane. Kanafi likes flying the Piper Super Cub but prefers a Cessna 182 to take his family, including children Nicole and Adam, on longer trips.

“We’d go to [the southern resort of] Eilat, the Sinai, Cyprus. Or, Kiryat Shemona for a picnic and then come back,” he said of the northern city.

As both an Israeli citizen and an envoy, Kanafi dreams of peace for its own benefits. As an aviator, Kanafi sees peace as offering opportunities to visit countries with which Israel doesn’t yet enjoy diplomatic relations.

“On the Microsoft flight simulator, when you go north of Haifa, the [Israeli] air traffic controller hands you off to the Lebanese ATC,” he said. “That’s the way things actually should be. It would be good if one day the world reflected this computer program. Lebanese people I meet say great things about the country.”