Get the app Get the app
AOPA will be closed July 4th, in observance of the Independence Day holiday. We will reopen at 8:30 am ET on Tuesday, July 5.
News & Media New flight school in the FRZ

New flight school in the FRZ 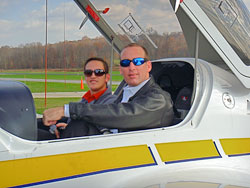 A struggling economy and a location within the Washington, D.C., Flight Restricted Zone (FRZ) would deter many people from launching a new flight school, but not Tim Poole of White Plains, Md. Poole and his wife, Karen, opened GT Aviation at Potomac Airfield (VKX) in Friendly, Md., in mid-October.

It’s also one of the “Maryland 3” airports within the FRZ, which encompasses a 13- to 15-nautical-mile radius around the Washington, D.C. VOR-DME. (The others are College Park and Washington Executive-Hyde Field.) To operate at these airports, pilots must obtain a personal identification number by completing a form, visiting the Baltimore or Washington Flight Standards District Office, geting fingerprinted at Washington Reagan Airport, and completing a security procedure review. When flying, they must obtain a discrete transponder code from Potomac Approach. 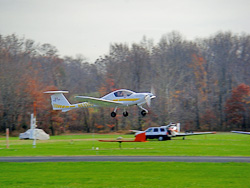 GT Aviation uses a Diamond DA20 for primary training out of Potomac Airfield, which is located within the Washington, D.C., Flight Restricted Zone.

Poole, a private pilot who trained at Potomac, says, “You end up with new pilots with superior radio skills as a result, because they’re constantly working with air traffic control and Potomac Approach as they fly through this airspace.” The FRZ “doesn’t preclude anyone from learning how to fly,” he emphasized. “You just comply with the FRZ procedures and you can still go out on a nice afternoon and go up in the air.”

GT Aviation offers training from private through ATP using a Diamond DA-20 and a Piper Arrow. The flight school held an open house in November and has attracted a lot of interest from residents of Washington, D.C., and Alexandria, Va., Poole said. An IT consultant for the federal government, Poole said he has always wanted to own his own business, and that desire intensified after a “painful experience” obtaining his private pilot certificate. He credits his CFI, Matt Adams, for seeing him through the process. Adams now works at GT Aviation.

“My decision to open was motivated by my desire to offer the same opportunities to learn to fly, but with a huge focus on customer service,” Poole says. The school offers several plans that enable customers to budget their flight training payments as they would any other type of expense, he says.