Get the app Get the app
Get the latest news on coronavirus impacts on general aviation, including what AOPA is doing to protect GA, event cancellations, advice for pilots to protect themselves, and more. Read More
Already a member? Please login below for an enhanced experience. Not a member? Join today
News & Videos Sweeps winner lands at New York Center 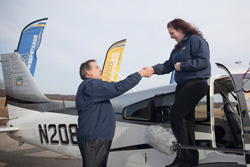 AOPA’s 2008 Get Your Glass Piper Archer sweepstakes winner Karoline Amodeo recently landed a spot with New York Air Route Traffic Control Center, covering one of the center’s two oceanic areas. Amodeo and three of her classmates from the FAA Academy in Oklahoma City, Okla., were assigned to the area. While she awaits further training at New York Center to work toward a control position, she will “stuff and sequence” flight strips of pilots’ flight plans for the radar sectors.

While you won’t be able to see Amodeo during her shifts at the center, you might be able to catch up with her at her second job at SheltAir Aviation Services, a fixed-base operator at Republic Airport in Farmingdale, N.Y.

“I wanted to keep one foot in the general aviation door because I do love private aviation, but don’t get to deal with it much anymore,” Amodeo wrote in an e-mail update to AOPA.

AOPA surprised Amodeo with the sweepstakes airplane at International Women in Aviation conference in Atlanta in February. Amodeo attended the conference under the ruse that she would be working for AOPA. She even went onstage before 1,000 attendees to hold a model of the Archer while AOPA President Craig Fuller announced the winner. But the surprise wasn’t over for Amodeo. Her parents joined the Atlanta celebration via a satellite television feed from Dutchess County Airport near Poughkeepsie, N.Y., where the airplane was stationed. Amodeo flew to New York with Fuller later that day in AOPA’s CJ3 to officially accept the keys. ( See “We have a winner!”.)

Since winning the glass-cockpit Archer, Amodeo has earned her instrument rating in the aircraft and says, “I have flown my plane quite a bit.”

“I am still getting the ‘YOU WON A PLANE?!?!!’ at work and have to tell the story because the usual second question is ‘How exactly did that happen?!,’” she wrote. 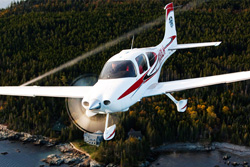 This year, AOPA is focusing on its Let’s Go Flying Cirrus SR22 Sweepstakes airplane. We’ve fitted the aircraft with new decals—its final color scheme—so that it’ll be ready early next year when we announce the 2009 sweepstakes winner!