Get the app Get the app
Already a member? Please login below for an enhanced experience. Not a member? Join today
News & Media Matriarch of Maule Air dies at 92

Matriarch of Maule Air dies at 92 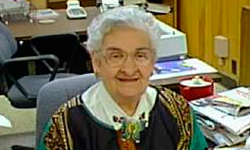 June D. Maule, owner and manager of Maule Air in Moultrie, Ga., and wife of Maule founder B.D. Maule, died Oct. 29 after a brief illness at age 92. The same day her son, Gary, 57, died from leukemia.

June, born in Jersey Shore, Pa., married her husband in 1934 and worked with him to develop and sell Maule aircraft. Her husband died in 1995. She remained involved with the factory until her death.

Including Gary, four of her children worked at the Maule factory along with two spouses of children and two grandchildren.

She was inducted into the Pioneer Hall of Fame created in 1992. Other inductees are Jeana Yeager, Olive Ann Beech, Nadine Jeppesen, Audrey Poberezny, Amelia Earhart, Anne Morrow Lindbergh, and Patty Wagstaff. The Pioneer Hall of Fame honors women who have made significant contributions to aviation as record-setters, pioneers, and innovators.