Get the app Get the app
AOPA will be closed July 4th, in observance of the Independence Day holiday. We will reopen at 8:30 am ET on Tuesday, July 5.
News & Media GA Serves America: Chasing Ehren

Now you see him, now you don't

Sunrise sends red, then yellow light tumbling 2,000 feet down Rattlesnake Ridge onto a layer of fog filling Napa Valley, California. Pickup trucks booming Latino music and loaded with workers have emerged from the mist to pick fruit in the vineyards on the rolling hills.

Sunrise sends red, then yellow light tumbling 2,000 feet down Rattlesnake Ridge onto a layer of fog filling Napa Valley, California. Pickup trucks booming Latino music and loaded with workers have emerged from the mist to pick fruit in the vineyards on the rolling hills. There’s a sense of urgency. The fall harvest is at its peak by late September, and the de-stemming machines are hungry.

To the untrained eye the grapes all look the same, although some are greenish-white and the rest are purple. You might reject them as too small if you saw them in a grocery store, yet they explode with natural sugar out of all proportion to their size. These are the thoroughbreds of the grape community, finely tuned for one purpose.

The eight-member staff of Failla Wines (pronounced fay’ la) would never buy grapes from the grocery store—too bland. They’ve tasted real grapes at work—at least at harvest time. Boss Ehren Jordan eats six pounds of grapes a day during the crush, but that’s his job. As the man with a golden palate and a memory for tastes, he’s produced award-winning wines for two decades.

Failla is Jordan’s dream job. His day job is manager and winemaker (the only winemaker) for Turley Wine Cellars near St. Helena that also has a facility 200 nm south near Paso Robles, California. That’s where the airplane comes in—make that airplanes. He jumps into his 1981 Cessna 340A for a flight to Paso Robles the way you and I might go to the grocery store. His route passes San Francisco and the Golden Gate Bridge. He keeps a second airplane, a 1982 turbocharged Cessna 182 retractable, at Angwin-Parrett Field perched more than a thousand feet above the Failla winery. From an aircraft he can spot diseases in grape vines, discover irrigation problems, and market wine across several states after it is bottled. He can visit the far-flung wineries that supply his fruit and make his own decisions about ripeness. It’s great for family vacations, too, and short trips to a restaurant favored by his two daughters, the Two Niner Diner in Petaluma, California.

Since grapes for both wineries are ripe at the same time, Jordan must make the 2.5-mile run between Turley and Failla many times a day. AOPA Chief Photographer Mike Fizer and I gave chase in our rental car to see how aviation is a part of the winemaking process.

Aviation mentoring came from Turley Wine Cellars owner Larry Turley, who is a rarity among Napa Valley winery owners. Unlike most, he allows his winemaker, Jordan, to bottle his own brand as long as it doesn’t compete.

The purchase of the facility in Paso Robles meant Jordan needed to be there two or three days a week, a 10-hour round trip by car. Turley owned an airplane, so he flew Jordan to Paso Robles when he could, but their schedules didn’t always agree. That led to mentoring and encouragement to become a pilot. Jordan got three hours off in the middle of the day for flight instruction.

Turley suggested Jordan learn to fly at Angwin-Parrett Field, where the wind once blew his refueling stepladder to the ground. If Jordan learned to handle that airport’s wicked crosswinds, he could safely land anywhere, Turley said.

Time to look around

Our first attempt to follow Jordan to Paso Robles was delayed by a problem in the vineyards. Work lights fell over during an all-night picking session, smashing the bulbs and stopping the work. Jordan had to arrange for an emergency work crew the next morning to harvest the grapes.

With no airplanes in sight, Fizer photographed the winemaking process. I amused myself by removing a bung (you and I would call it a cork) from an older barrel in the wine cave to hear the frying-bacon sound of Chardonnay making itself into wine. Then I joined the sorting line for Pinot Noir grapes, used for 70 percent of the 5,000 cases of wine produced at Failla each year. I flicked stems off a rapidly moving conveyor belt into a bin for two hours along with the staff, including Jordan’s wife and Failla’s chief financial officer, Anne-Marie Failla. John Lockwood, who works for Failla, assured me that with my two hours of hard work, I “basically made” the 2009 Pearlessence Pinot Noir. (It will be released in a year or so, and I hope you like it.)

As a reward for our hard work, Fizer and I were invited to a harvest lunch in Jordan’s new storage cave complex. Chef Melinda Burdo, hired for the harvest, later sent me a copy of our menu: slow-roasted Alaskan king salmon, heirloom tomatoes from a local farm served with Sonoma teleme cheese, basmati rice salad with curry and pecans, apple galette with creamy yogurt, local Goats Leap chevre with fresh figs, and lemon verbena syrup that Burdo brought from her home in Seattle. Not bad for a company cafeteria. 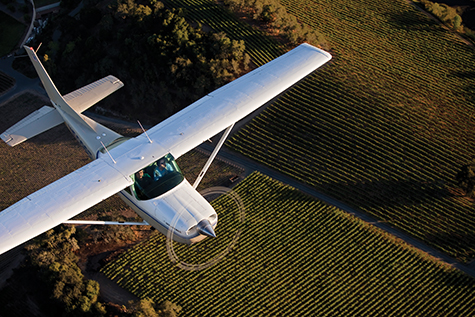 That night it was time to photograph Jordan in his first airplane—the one insurance companies suggested for a new pilot, the 182. With Turley guiding us as safety pilot in the lead airplane, we made wide arcs across the valley from Turley Wine Cellars to the hills where Failla is located.

At 1,500 feet above the valley floor the sweet aroma of grape juice fermenting told us this was wine country. But finding Failla proved difficult. Turley told Fizer, “We’re over it!” Fizer, seeing nothing much below, gunned his Canon motor drive and discovered he had indeed captured a shot of the tiny winery with its stainless-steel fermenting tanks.

We returned to Angwin-Parrett Field, where the 182 is hangared, for a few passes down the runway.

Off to Paso Robles

On the second day it again looked like we might not fly. Jordan was frustrated that a bottling truck had arrived to begin work at 7:30 a.m., but preparations had fallen behind. Once bottling started, we drove to Santa Rosa where the Cessna 340 is kept. Jordan bought the 340 in 2006 for his expanding family and business relationships. It also cut 30 minutes off his commute to the second Turley facility, compared to the Cessna 182. Passing San Francisco, Jordan recalled that controllers have allowed him to take what is known as the “bay tour,” which passes the Golden Gate Bridge.

The paint and interior of both the 340 and 182 appear new, yet they have factory original paint. To each aircraft panel Jordan added a WAAS-enabled Garmin 530/430 combination with traffic and weather information.

“Without my airplane, Larry would have to hire another winemaker, and that would upset the whole apple cart. Larry is adamant that one person’s hand be on the tiller,” Jordan said. “You hear the same thing over and over at a lot of businesses—the ability to be in very close contact with our customers and suppliers, especially now in this economic time. I don’t think [the airplanes are] fully quantifiable to our business—but it’s a huge impact. My distributors know that I can be on an airplane and get to them very quickly if something comes up, an opportunity to be taken advantage of, a sales presentation, an account that needs help. It allows us to do what we do,” Jordan said.

Once at the Paso Robles facility the routine was the same as at Napa Valley. Taste the grapes for ripeness. Talk with the workers. Check a fermenting tank or two. A tattered windsock with the barely visible words “Zinfandel International” marks a dusty, unused airstrip on the Paso Robles vineyard. There’s no way U.S. Customs would ever approve it.

Soon it’s off to McDonald’s for the quickest of lunches. We’re on Jordan time now, not local time. There will be no lunch with California heirloom tomatoes this day. While the flight both ways was in visual conditions, Jordan logs many hours of “actual” every harvest.

On the last day of our visit we still needed a family portrait. Plans to take it in front of the winery were scrapped; a hasty alternative was arranged by Jordan’s wife, Anne-Marie, who is also Failla’s chief financial officer. It would be taken instead at the family’s home in Calistoga. The winery was once called Failla-Jordan, but another company using the name “Jordan” objected.

Eight-year-old Audrey Jordan presented a Failla business card with her name on it. “This is my first time representing Failla,” she said. A squirrel at the base of a tree on the label represents Audrey, after her father’s nickname for her when she was little. Four-year-old Vivien has a wine named after her.

Jordan nearly bolted back to work before Fizer could click the family portrait, but a single look from Anne-Marie convinced him he could wait. With the photo taken, the family disappeared to the winery for an evening event; our chase was over.

As harvest ends, marketing begins. For Christmas, the family flew in the 340 to Boulder, Colorado, for a marketing event, then to Tulsa for a wine dinner, and finally to Pittsburgh to see Anne-Marie’s family. They are working hard to earn a prominent place among Napa Valley’s 433 wineries. The work for the dream never ends.