Pilot Charles S. “Chuck” Tippett Jr. of Warrenton, Virginia, is a “wood walker” in more ways than one—two, to be exact. He works as a wood walker—an insider’s term for linemen who climb utility poles—for the Rappahannock Electric Cooperative. As a performer and pilot in the Flying Circus near Bealeton, Virginia, he walks wooden biplane wings to thrill crowds.

Tippet is owner of a Quicksilver and a Hurricane ultralight, a 1945 Piper L–4 (Cub), and a 1946 Aeronca L–16 (Champ). In addition to walking outside a biplane, he flies aerobatics as a Flying Circus performer. He is also a flight instructor specializing in teaching people who might not otherwise get the opportunity to fly. His e-mail address is “urplanecrazy.” And he taught himself to fly by reading a book.

That’s right, he read a book. His ultralight had only one seat. The self-teaching process literally required a hop, skip, and finally a jump into the air—over time, of course. The hops became extended flights, ultimately leading to turns about the Statue of Liberty in 1989, but even that wasn’t enough. He became a private pilot in 1990.

His love of flight formed as a child when he imagined his bicycle would fly if only he pedaled fast enough. The memory returns as he walks on a wing.

The passion has not cooled. In February his Champ and Cub were on skis and he was flying every evening to provide a ski-flying experience for people who had never experienced it. One of those was a U.S. Navy pilot who had flown everything from an Albatross to fighter jets. Tippett signed him off to solo on skis. When the man emerged from the aircraft he told Tippett, “Chuck, I have always dreamed of flying on skis. That was the most beautiful flight I have ever had.”

As double snowstorms hammered Virginia this past winter and two substations went down, he got a call from his boss. “Chuck, can you get one of your planes in the air and check a 14-mile power line?”

“I’ve always dreamed of that opportunity,” Tippett said. He went to the hangar, shoveled the door out of the snow, and took off in the Cub atop the snow. In 40 minutes he found the offending tree that had dropped its limbs on the power line, and directed a crew to it. Three thousand people got their power back. 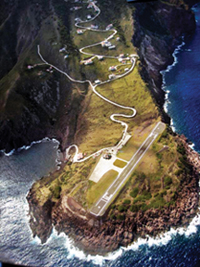 Practice before you go here

Is this the world’s most challenging runway? Many pilots think so. Juancho E. Yrausquin Airport on the island of Saba in the Netherlands Antilles in the Caribbean is only 1,312 feet long, yet it has airline service. Winair offers daily flights in de Havilland Twin Otters from its headquarters on St. Maarten, and has special permission from the Netherlands Antilles Civil Aviation Authority. Final approach requires a pilot to fly at an angle to the runway to stay as far as possible from a rock wall, then make a perfect short-field landing. The penalty for failure is either a go-around (preferred) or a steep drop-off into the ocean. Did we mention that only 1,000 feet of the runway is usable? The photo was taken by world adventurer Robert Gannon.

Crews in the car and the airplane will have to complete a series of treasure-hunt-style tasks before they arrive on the ramp at Lakeland Linder Regional airport. The team with the most points will get bragging rights all week as the Remos and the SMART car will be on display in front of AOPA’s Big Yellow Tent at Sun ’n Fun.

The Fun to Fly Sweepstakes Remos burns about four to six gallons per hour. It’s outfitted with a Dynon glass panel, Garmin 496 GPS, and autopilot.
The Mercedes-Benz engineered SMART car, also known as smart fortwo is a “micro car,” which gets an estimated 33/41 miles to a gallon (city/highway).

Both vehicles will be equipped with video cameras and telecommunications gear to allow the teams to relay their experiences and positions through Facebook, Twitter, daily blogs, and more. Watch AOPA Online for updates, a map, and all of the ways you can follow the Fun to Fly Sweepstakes Road and Runway Rally.

Since 2002, friends of Capt. Jason Dahl, one of the United Airlines Flight 93 pilots killed by terrorists who crashed the aircraft in Pennsylvania, have offered flight scholarships to a college Dahl attended and another in his hometown of Denver.

The $5,000 scholarships have gone to San Jose State University and Denver’s Metropolitan State University. There are tentative plans to expand the program to Western Michigan University, and hopefully to flight programs at universities nationwide. While the scholarships are open to any student in an aviation program, recent awards have been used for flight training.

The fund is strong financially, and oganizers said the goal of nationwide scholarships is within its grasp. To learn more about the fund, visit the Web site. 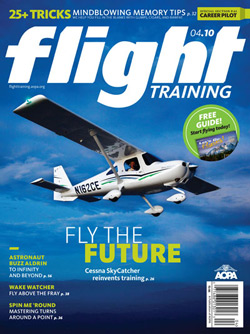 For 21 years, the award-winning AOPA Flight Training magazine has educated and entertained prospective, student, and current pilots with its compelling editorial and instructional material. But in that time the magazine has not undergone a comprehensive redesign. The editors and designers
of the magazine decided it was time.

With the April 2010 edition, Flight Training now has a new, modern, exciting look. “Our focus and mission has not changed,” says Ian J. Twombly, deputy editor of Flight Training. “But we understand that the way readers consume information has changed significantly since AOPA started publishing the magazine more than a decade ago, so we’ve kept the information the readers have come to expect, but started with a clean slate
for the best way to present it.” (AOPA purchased Flight Training in 1998.)

The magazine’s staff focused on Flight Training’s strong points—its written content and photography. The magazine was reorganized and infused with tools to help the reader navigate the publication more easily. The magazine includes more information on what pilots can do and places they can go once they’ve earned their certificate—and it provides inspirational stories to help pilots remember why they decided to become a pilot in the first place.