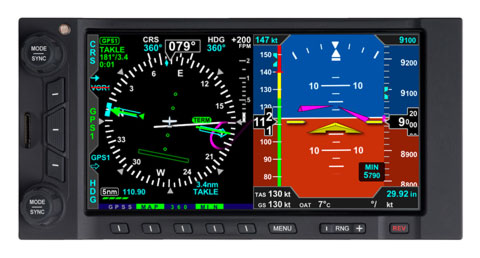 Aspen Avionics will add synthetic vision and an engine monitor to its Evolution flight display system, the company announced April 8 at the Aircraft Electronics Association convention.

GPS-derived synthetic vision is scheduled to appear on Aspen displays during the first quarter of 2011, and the engine monitor will be offered this year.

Aspen also is taking aim at the last vestige of electro-mechanical instruments in glass-cockpit aircraft with its Evolution Backup Display (EBD). The digital instrument is meant to replace standby attitude and airspeed indicators as well as altimeters. The backup system is built on the same hardware platform as Aspen’s other displays, except the backup system is placed horizontally in instrument panels instead of vertically. Instead of showing just attitude, altitude, and airspeed, the new system will add an HSI, vertical speed, heading, and auto-pilot-connected GPS steering.

Aspen also will offer AeroNav charts on its Evolution flight displays on its upcoming Version 2.2 software.

Charts are being offered as a subscription-based system that will be “significantly less expensive” than existing charts, according to Brad Hayden, Aspen’s vice president for marketing.