Get the app Get the app
AOPA Members DO more LEARN more SAVE more - Get MORE out of being a pilot - CLICK HERE
News & Media Diamond surviving, big plans on horizon 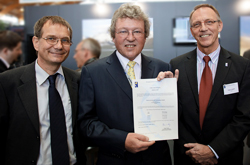 In a wide-ranging press conference AERO Friedrichshafen in Germany this week, Diamond President and CEO Christian Dries expanded on several ambitious programs his company is pursuing. “We had to diversify to survive the economic downturn,” he said. The more Dries expanded on his vision of the future, the more it sounded like he was counting on unbridled success in the short term. Here’s a synopsis of some of the projects now on Diamond’s to-do list:

Diamond’s new AE300 Austro engine—a 170-hp, Jet-A burning turbodiesel—was awarded EASA certification for installation in all existing EASA-certified DA40 aircraft. Dries was on hand for a ceremony acknowledging the milestone, which can essentially transform any DA40 into a DA40 NG.

From now on, all DA40s manufactured in Europe (this excludes the 180-hp Lycoming-powered models) will be equipped with the AE300 engine, and called DA40 NGs. The retrofit option converting European Thielert-powered DA40s into Austro-powered NG models will cost approximately $100,000 Euros—or about $135,000 at current exchange rates. That price includes engine mounts, a new cowling, and other components necessary to the conversion.

An FAA-approved DA40 engine swap for American-based airplanes has yet to be approved.

Dries said that discussions have taken place with representatives from Cessna and Piper with regard to fitting out those manufacturers’ new airplanes with the AE300 engine. In the DA40 application, the AE300 helps turn in true airspeeds as high as 160 KTAS, with full-power fuel burns of 9.1 gph.

“With power reductions, cruise fuel burns drop in a linear fashion,” said Dries. “In other words, if you reduce power by 10 percent, then fuel burn drops by 10 percent, to about 0.91 gph, and so on. At 70 percent power, fuel burn is approximately 6.4 gph.”

The DA42 NG—which EASA certified last year—has just been awarded its U.S. type certification. Diamond’s AE300 Austro engines power the twin turbodiesel, which was the first airplane to be certified with the new powerplants. 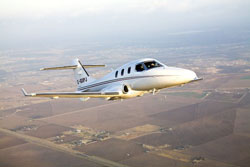 Diamond’s D-Jet has cost the company a $140 million investment to date, and financial pressures have caused Diamond to obtain an unnamed partner in order to finish the project. An influx of $8 million has helped Diamond to overcome problems associated with designing satisfactory engine air inlet structures, but another $100 million is needed to finish the project, according to company officials.

The design issues and monetary shortfalls have caused unavoidable delays in bringing the D-Jet to market. Now, Diamond says that the airplane may begin production some time in 2011. Production will begin with rates of two or so airplanes per month, then ramp up gradually to 16 D-Jets monthly. Meanwhile, Diamond is designing a military training version of the D-Jet, which it hopes it can sell for two million Euros/$2.7 million per copy—without a weapons system.