Get the app Get the app
Already a member? Please login below for an enhanced experience. Not a member? Join today
News & Media Remos, Smart car kick off airshow 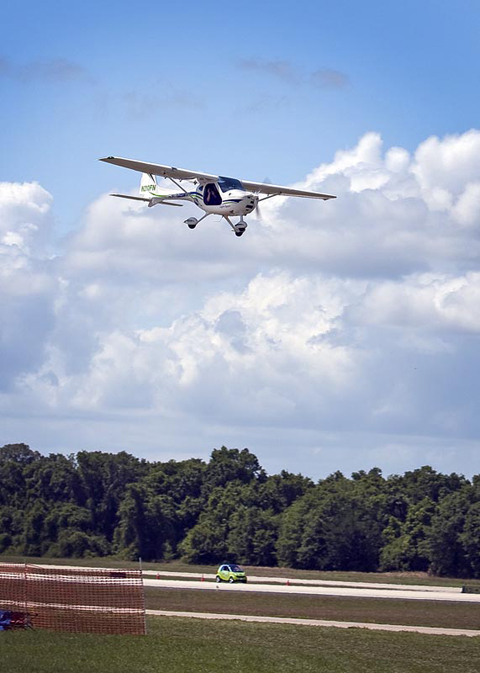 The two pilots peered out of the side of the Remos GX, looking for their counterparts on the ground. They were scheduled to make a low pass over Lakeland Linder Regional Airport in perfect synchronization with a Smart fortwo racing down the runway—a grand finale for the Road and Runway Rally, and a kickoff for the Sun ’n Fun airshow—but the Smart car was nowhere to be found.

Pilot in command Alyssa Miller and her co-pilot Jason Paur continued toward the field for its pass over the grass to the right of the runway. They finally spotted the car on short final, and soon they were neck-and-neck with the Smart car, which had been there the whole time: The roughly 9-foot-by-5-foot vehicle had been nearly invisible from a distance, swallowed by the circle in the "9" of the 8,500-feet-by-150-foot runway. The Smart car kept pace with the Remos for a bit until the airplane climbed and went around for a landing. 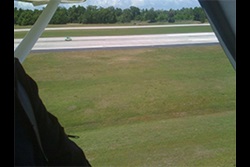 After four days of flying and driving adventures, the four contestants in the Road and Runway Rally arrived at Sun ’n Fun in style. Along the way, they met circus performers and pilots-to-be, tested their driving skills at the Grave Digger’s lair, and compared the size of the Smart car to everything from the Mercury capsule to a monster truck tire. Each team got two days in the Smart car and two in the Remos—which, by the way, weighs less than the tiny Smart car. The winners? The jury’s still out. But one thing’s for certain: Both teams had a whole lot of fun.

"It was a great trip to remind you that flying is about how much fun it is getting there," said Flight Training Deputy Editor Ian Twombly, who finished the rally with MotorWeek reporter and producer Steve Chupnick in the Smart car. Twombly and Chupnick started out in the Remos, but they had their share of automotive adventures. In their two days of driving, they sped around Roebling Road Raceway and made stops at Daytona International Speedway and a drag strip. By the time they zipped down the runway at Lakeland, they had thoroughly tested the mettle of the car.

Twombly and Chupnick inherited the keys to the Smart car halfway down to Florida from Miller, AOPA’s eMedia managing editor, and Paur, a correspondent for Wired.com. While Paur, a pilot, said he was surprised at the fun he could have in the Smart car, he was happy to swap vehicles when the time came.

"The Smart car was fun to drive, but after several hours the novelty had worn off, and I would have been happy to take the Remos to the Bahamas," Paur said. Teammate Miller said that no matter whether the participants were in the Smart car or the Remos, discussions always came back to aviation. 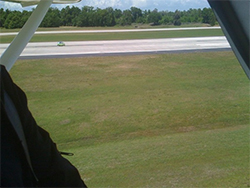 "All along the way, we got to share the love of aviation with adults and especially children. Whether we were in the Smart car or the Remos, whatever we were embarking on people would ask what we were doing, and we’d get to tell them about learning to fly," she said.

One participant got to experience that for himself during the rally: Chupnick, who brought automotive expertise to a field of competitors that skewed toward aviation, got to fly for much of his time in the air with flight instructor Twombly.

"The highlight of the trip for me was flying down the East Coast," he said, "and getting to drive a Smart car down an airport runway. … I’ve had the opportunity to drive and ride in a lot of different modes of transportation; however, being around the plane has given me a newfound respect for pilots and flying in general. This has absolutely been one adventure I will never forget!"

Find out more about the adventures along the way in the Road and Runway Rally. Check out photographs, blogs, and tweets from the road (and air), and judge for yourself who deserves the title of road and runway champion.