Get the app Get the app
AOPA will be closed July 4th, in observance of the Independence Day holiday. We will reopen at 8:30 am ET on Tuesday, July 5.
News & Media SwiftFuel powers Seminole at Sun 'n Fun 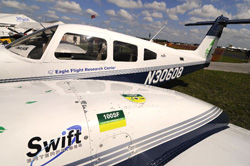 Erik Lindbergh, grandson of Charles Lindbergh, is serving as guest pilot on the flights, along with staff from Embry-Riddle Aeronautical University. “The future of general aviation is quickly evolving toward alternative aviation fuels,” Lindbergh said. “I’m delighted to be working with Swift Enterprises and Embry-Riddle to help solve the leaded fuel challenge for general aviation.”

SwiftFuel does not use lead, ethanol, toluene, or oxygenates, and produces fewer pollutants than 100LL fuel—while providing 15 percent more volumetric energy, the company said. The fuel does not require any additives or stabilizers, and the company believes it could be “a near drop-in replacement” for today’s 100LL fuel.

Embry-Riddle Aeronautical University plans to phase in lead-free renewable fuel for its training aircraft, the nation’s largest collegiate fleet. Engineers in the Eagle Flight Research Center, a laboratory in the College of Engineering at Embry-Riddle’s Daytona Beach, Fla., campus, will perform the certification testing needed to enable more than 40 Cessna 172s, nearly half of the university’s fleet of 93 aircraft, to use Swift fuel.

"Having Embry-Riddle come with us to Sun ‘n Fun, one of the premier airshows in the United States, brings credibility and attention to what we have been doing to ease the pressure general aviation has been under not only to get rid of leaded fuel but also to reduce the need for crude oil in the United States," said Mary Rusek, president of Swift Enterprises.