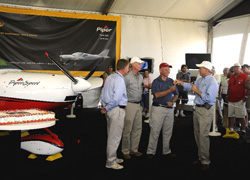 Gould said the airplane is “an amazing entry-level aircraft that will bring new customers to Piper. It fits perfectly into our overall mission of delivering the very best airplanes.” Over time, he added, the design will encourage customers to step up to more sophisticated and higher-performance aircraft in the Piper product line.

Piper introduced the PiperSport in January at the U.S. Sport Aviation Expo in Sebring, Fla. The airplane, based on the Czech-built Sport Cruiser, is manufactured by Czech Sport Aircraft and distributed through PiperSport Distribution Inc. Final assembly takes place in the United States. At Sun ‘n Fun, Piper had three of the new airplanes on display—one on a turntable in the Piper tent, one displayed outside, and a third at the LSA Mall near the show’s main entrance.

Piper’s iteration of the airplane features Dynon avionics, a leather interior, and a BRS airframe parachute. Piper also beefed up the Sport Cruiser’s nosegear. The airplane, powered by the Rotax 912 engine, can burn 100LL avgas or premium unleaded automotive fuel. It has a range of 600 nm and a useful load of 469 pounds.

Accepting the keys to the first PiperSport on Tuesday afternoon were three Miami pilots. Charlie Carlon, 62, is a 20,000-hour former Delta Air Lines pilot who works as a simulator instructor for Airbus North America. Brian Garhammer, 52, a 16,000-hour former ATA Airlines pilot, also instructs for Airbus. Dr. Mike Morduant, 62, is a veterinarian who has been a pilot for 42 years.

Piper is offering three versions of the LSA. The basic PiperSport costs $119,900; a trainer, the LT, is $129,900; and the top-of-the-line LTD is $139,900. Piper said production rates for the airplane are accelerating and that pilots who put down deposits on a PiperSport at Sun ‘n Fun should be flying their new airplane this summer.

Piper has made excellent use of social media in promoting the PiperSport, and has posted a video of the aircraft being assembled. Time-lapse photography accelerates the assembly to less than one minute. A PiperSport page on the social media Web site Facebook had more than 9,250 fans on April 13, the fly-in’s opening day.