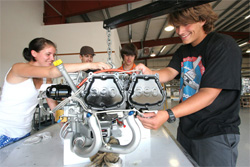 “This economy has been a wonderful thing for Build A Plane,” Freeman said. “We’ve seen a significant increase in aircraft donations. Some are flying. Some are not flying, but all of them are helpful.”

The organization was set to receive a flying Piper Twin Comanche April 15 in Lansing, Mich., and projects under way include aircraft in both Standard and Experimental categories.

A group of 11 children in a remote village in Alaska have a Thorp T-211 under construction and expect to fly it within one month. Three of the young people who helped build it have gone on to receive Airframe & Powerplant mechanic certificates, and two are in flight training. The group plans to fly the two-seat airplane to the EAA AirVenture in Oshkosh, Wis., this summer.

Build A Plane also will host a Teachers’ Day at AirVenture on July 26; and the organization has formed a partnership with AeroScholars to offer online courses that students can use to gain high school and college course credits.