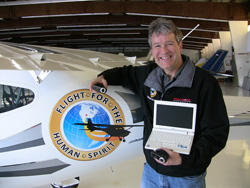 A Flyvie Pro Recorder is used by Michael Combs in his Remos light sport aircraft for his Flight for the Human Spirit.

Flyvie is a developer and manufacturer of portable video capturing and debriefing systems. The units capture and record video with two small cameras, including GPS data and both internal and external radio communication. Captured video includes the pilot’s view as well as the instrument panel and the pilot’s manipulation of the flight controls. The data is saved to a small personal memory card that can then be analyzed over the Internet.

Flyvie also has a soon-to-be-released iPhone application named Flyvie Lite that turns every iPhone 3GS into a personal flight recorder. Video, GPS data, and real-time tags can be viewed through the Flyvie Viewer.

Several flight schools and flying clubs use the Flyvie system and share the flights on YouTube. Watch a demo.