Get the app Get the app
Already a member? Please login below for an enhanced experience. Not a member? Join today
News & Media Sun &rsquo;n Fun gets $7.5 million grant for new academy building 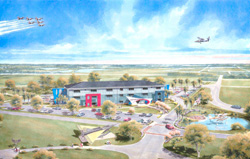 Officials from the Sun ‘n Fun Fly-In and the Polk County (Florida) School board broke ground on a new $7.5 million building that will house the Central Florida Aerospace Academy (CFAA). The aviation-oriented high school and career academy is currently located on the Sun ‘n Fun campus.

The 58,000-square-foot facility will house up to 500 high school students when completed. It is set to open in August 2011 and will be located next to the Florida Air Museum. The current CFAA building holds 175 students.

The Aviation Education Foundation, a not-for-profit organization in Naples, Fla., provided a $7.5 million grant for the building, and also will donate up to $500,000 to purchase furniture, fixtures, and equipment, Sun ‘n Fun officials said.

“It is my belief that teaching young people the discipline required to learn the science of flight builds character and confidence,” said James C. Ray, founder of the organization. “The experience of solo flight teaches them that they are independent and free-thinking individuals who are fully capable of being in control of their own life.” Ray is a pilot with 70 years of flying experience, and a former B-17 “Flying Fortress” pilot and a captain during World War II.

CFAA Assistant Principal Chad Smith said the new building and improved facility will allow it to almost triple enrollment while providing more students the opportunity to learn the mathematics, physics, and sciences of aviation in a stimulating environment. The CFAA is in its second year and houses 115 high school sophomores and juniors. Enrollment could reach between 400 and 500 students within five years, the Polk County School Board estimated.