Get the app Get the app
AOPA will be closed July 4th, in observance of the Independence Day holiday. We will reopen at 8:30 am ET on Tuesday, July 5.
News & Media Tecnam Twin certified by FAA 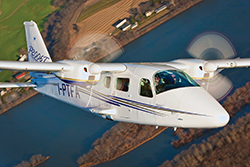 The P2006T Tecnam Twin has received FAA certification for VFR and analog IFR operations. The aircraft is certified for glass-panel IFR operations in Europe, something expected to be completed by the FAA later this year. (See " Tecnam’s Twin," April 2010 AOPA Pilot for more information and specifications.)

Overseas flight schools use the P2006T and other Tecnam models for all ranges of instruction including military and commercial airline applications.

A demo P2006T has toured the United States. Prospective customers are looking at the aircraft as a personal aircraft, for surveillance work, and for Part 135 operations.