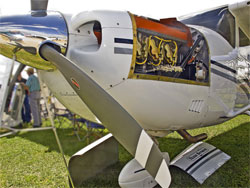 Texas Skyways of Boerne, Texas, plans to expand its Cessna re-engining business to include a 310-horsepower Continental IO-550-N engine for the Cessna 182 S and T models. It is hoped the STC will be awarded by the FAA in July or August.