Get the app Get the app
AOPA Members DO more LEARN more SAVE more - Get MORE out of being a pilot - CLICK HERE
News & Media &lsquo;The future of GA is up to each of us,&rsquo; Fuller tells pilots

&lsquo;The future of GA is up to each of us,&rsquo; Fuller tells pilots 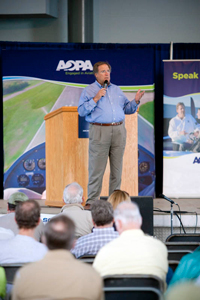 The strength of general aviation is its pilots, and its pilots—together and individually—can do great things if only they become engaged with aviation. That was the message AOPA President Craig Fuller brought to a pilot town hall meeting April 15 at Sun ’n Fun in Lakeland, Fla. The Thursday evening town hall meeting has become the advance kick-off event for AOPA Day, held the Friday of each year’s Sun ’n Fun.

Speaking to a crowd of AOPA members and nonmembers alike, Fuller said the future of GA rests in the hands of pilots and that they need to actively participate in defending GA’s interests.

“At AOPA we are busy doing more than ever before to keep flying strong,” said Fuller. “And everywhere I go I meet people who want to help, but they don’t know how.

“Being more engaged can be as simple as staying informed about the issues that affect your flying and as involved as hosting a major public event. But in between are almost infinite opportunities.”

“Some of you might be asking yourselves, ‘Why does a bigger pilot population matter? Flying has always been something that appeals to certain people more than others.’

You are engaged in aviation every time you look up, tell friends and family your pilot stories, or go to the airport to sit and watch the airplanes. There are other ways you can get involved in aviation, and AOPA wants you to share them at Sun ’n Fun.

Swing by the association’s Big Yellow Tent to enter daily drawings and tell AOPA how you plan to engage in aviation in 2010. Prizes include duffle bags, pilot gear, USB thumb drives, and the top prize, a Bose Headset X.

When you enter to win one of the drawings at the engagement kiosks, take the opportunity to pledge to engage in aviation this year. Will you encourage a prospective pilot to begin flight training? Will you find out more about where your elected officials stand on general aviation issues? Find out more ways you can engage in aviation on AOPA’s “Engage” Web page.

“Perhaps, but when we approach Congress, the White House, federal agencies, and policymakers about addressing GA needs and concerns, the more people standing behind us the better. Without a certain ‘critical mass’ it’s just harder to have our voices heard in the din of Washington.”

Fuller outlined some of the innovative steps AOPA will be taking, like reaching beyond the typical places to find future student pilots. For instance, AOPA just completed a rally race between the AOPA 2010 Fun to Fly Sweepstakes Remos GX and a Smart fortwo car, racing from AOPA headquarters in Frederick, Md., to Sun ’n Fun in Lakeland, Fla. Accompanying AOPA’s pilots were reporters from Wired.com and MotorWeek, who have been blogging to an audience that ordinarily doesn’t hear about aviation. And recently AOPA took a flight simulator to a Shape Up America healthy lifestyles fair in Los Angeles, giving a taste of flight to lot of people who might never have considered flight training.

Fuller said for individuals, getting engaged with growing the pilot population is even easier: take someone who’s never been out to the airport. Take them flying. Let them experience it for themselves.

Of course, pilots can only do that if they have someplace to fly from, so protecting airports is the second pillar.

“When airports are threatened, we need dedicated people on the ground, so to speak, who can respond quickly and effectively,” said Fuller. “It’s even better to have watchful pilots who can help prevent small issues from turning into big ones. The more than 2,000 Airport Support Network volunteers serve as eyes and ears at airports across the country. They stay alert for threats and engage local decision makers and airport neighbors to develop good relationships.”

Working to improve general aviation safety is the third pillar. 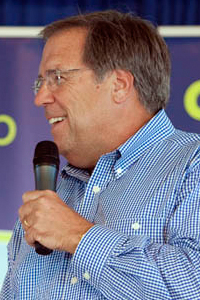 “This is one of the few issues that everyone can agree on. We all like being safe,” said Fuller. “General aviation safety has shown steady improvement overall. But until the accident rate is zero, we can continue to do better.

“When we, as pilots, do our part to make sure we don’t become statistics, we buoy the whole GA community. And we help change the way nonpilots think about general aviation and small aircraft.”

“Back at the height of the user fee debate, I told many people in government that we could fight a fierce, prolonged battle over user fees or we could set that issue aside and find more positive, collaborative ways to move our national aviation system forward,” said Fuller. “They agreed that they’d rather work together than invest in a drawn out battle.

“Now, it’s our responsibility to hold up our end of the bargain and make sure we work with government and our fellow aviation organizations to put general aviation on a solid footing.”