Get the app Get the app
News & Media Red Bull pilot safe after accident, water rescue

Brazilian pilot Adilson Kindlemann left the hospital with only minor injuries after the first accident in Red Bull Air Race history left him upside-down in the Swan River in Perth, Australia. 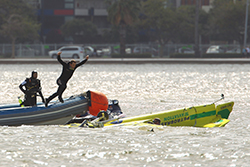 Rescue divers rush to the aid of Adilson Kindlemann of Brazil after he crashes into the Swan River during the Red Bull Air Race Training day on April 15, 2010 in Perth, Australia. Photo: Cameron Spencer / Getty Images for Red Bull Air Race

Kindlemann was maneuvering during practice April 15 when the tail of his MXS-R propeller airplane touched the surface of the water, the air race said in a statement. The right wing then clipped the surface and the 540-kg airplane flipped, leaving Kindlemann inverted in the Swan River. The 11,000-hour airline pilot escaped without serious injury, thanks to emergency rescue crews who pulled him from the submerged cockpit and had him in an ambulance within minutes.

“We know the pilots so we take it really personally,” said rescue team captain Danny Lopez, according to a Red Bull Air Race report. “We want to make sure we do the best we can for the pilots. I’m proud of these guys. I’m proud of the way we rolled out. We were just doing the job we train for.”

Rescue divers are present at each Red Bull Air Race, but they had not had an emergency until April 15; the accident was the first in the seven-year history of the low-level racing competition. It came just days after all pilots in the completion went through underwater emergency training.

Kindlemann, who was Brazil’s national acrobatics champion in the Unlimited category for three consecutive years, said one of the wings had a brief aerodynamic stall in one turn, but that he was able to keep the airplane in a good position. It impacted with the wings near-level. 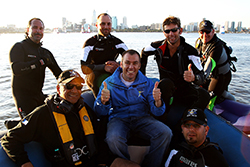 Adilson Kindlemann of Brazil meets some of the rescue team after his accident the previous day during the Red Bull Air Race Training Day Two on April 16, 2010 in Perth, Australia. Photo: Vladimir Rys / Getty Images for Red Bull Air Race

“I tried to fly up but the tail touched the water and then the plane flipped over,” Kindlemann told Red Bull Air Race reporting staff. “And then I was upside down. The water was coming in. It was dark. I said to myself ‘Adi, stay calm.’ My eyes were closed. I was feeling around in the cockpit, feeling for the lever to open the canopy. I used the air bottle and started to escape, opening the canopy about 20 cm. Then I started to go out and the guys (divers) are coming towards me like fish. It was unbelievably quick and they were there. Thanks to these guys, a fantastic job.”

Kindlemann was treated for minor whiplash at Royal Perth Hospital and stayed there overnight as a precautionary measure. The following day, he returned to the banks of the Swan after the day’s final training sessions to reunite with members of the rescue crew. The rescuers told reporters they were just doing their job.