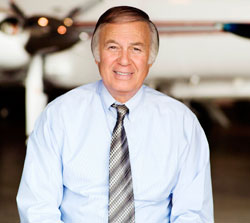 Captain Richard A. Greene, president and owner of Century Air at Essex County Airport in Fairfield, N.J., was given the 2010 Certificated Flight Instructor of the Year Award in late March from the Teterboro FSDO. The award, which represents a coordinated effort between the FAA and aviation industry sponsors, was presented in by George Bennett of the FAA.

Greene, a retired American Airlines captain with more than 30,000 hours of flight experience, has been an active flight instructor for nearly 50 years. During his career, Greene has been involved in all aspects of aviation, including teaching in a variety of general aviation aircraft and piloting large commercial jet airliners.

Greene has owned and operated Century Air since 1975, where he employs a team of professional flight instructors trained to his high standards of proficiency. Greene’s flight training center offers primary through advanced and career pilot programs.