Get the app Get the app
AOPA will be closed July 4th, in observance of the Independence Day holiday. We will reopen at 8:30 am ET on Tuesday, July 5.
News & Media Postcards: Long Beach

In 1910, aviators from around the world gathered at Dominguez Field, northwest of Long Beach, California, for America’s first aviation meet. Spectacles included dirigible and airplane races zooming past the grandstands at up to 60 mph (downwind, of course).

In 1910, aviators from around the world gathered at Dominguez Field, northwest of Long Beach, California, for America’s first aviation meet. Spectacles included dirigible and airplane races zooming past the grandstands at up to 60 mph (downwind, of course). The 10-day event attracted 16 airplanes and more than 200,000 people, among them 28-year-old William Boeing, who tried unsuccessfully to get an airplane ride. One participant was Earl Dougherty, who later built a flying field of his own. A century later, pilots still fly here. Today, they land at Dougherty’s field, now known as Long Beach/Dougherty Field (LGB), the host airport for AOPA Aviation Summit, November 11 through 13, 2010.

The growing city of Long Beach was a destination for entertainment and relaxation 100 years ago, and it still is. The famous Pike Amusement Park once boasted roller coasters, carousels, bathhouses, and miles of sandy beach. Today, the city’s attractions have expanded to include fine dining aboard a 1930s ocean liner to whale-watching cruises and access to all Southern California has to offer. A trip to AOPA Aviation Summit can easily become a vacation getaway for aviators and nonaviators alike.

Don’t let the maze of Class B, C, D, E, and G on the Los Angeles Terminal Area Chart (TAC) intimidate you. Flying to Long Beach is simpler than it looks, and a few easy-to-follow routes can help you navigate the alphabet soup of airspace.

The procedures on the back of the TAC explain how to fly through the Los Angeles Special Flight Rules Area (SFRA) over Los Angeles International Airport (LAX), northwest of LGB, without ATC clearance at 3,500 to 4,500 feet. After enjoying the bird’s-eye view of the big jets, fly southeast from the south end of the SFRA directly to LGB below the 5,000-foot Class B floor.

From the north, follow I-605. ILS approaches to Los Angeles International Airport (LAX) cross I-605 as low as 3,700 feet, and it only takes a glimpse of an airliner above you to persuade you to remain below the 2,500-foot Class B floor. The intersection with the Route 91 freeway is a good reporting point at the north edge of the Long Beach Class D.

SoCal Approach can provide advisories through the John Wayne-Orange County Class C east of LGB. Remember to avoid the “temporary” flight restriction for three nautical miles around Disneyland up to 3,000 feet agl (about 3,200 feet msl). Usually, traffic is light at Los Alamitos Army Airfield (SLI), so SoCal Approach can clear you through the SLI Class D and give you a frequency change directly to Long Beach Tower.

LGB has four 4,000- to 6,000-foot runways arranged in a square. Winds usually favor runways 25L/25R; runways 34L/34R are only used during Santa Ana winds, which sometimes occur in late fall. The 10,000-foot Runway 12/30 cuts diagonally across the other four and is used by air carriers and IFR traffic.

Most general aviation FBOs, including AirFlite, the host FBO for Summit, are near the west end of Runway 25L. If you approach from the north, you may be assigned 25R. Ask to sidestep to 25L; it’ll shorten your taxi distance by a mile. For special fly-in procedures during Summit, see AOPA Online. 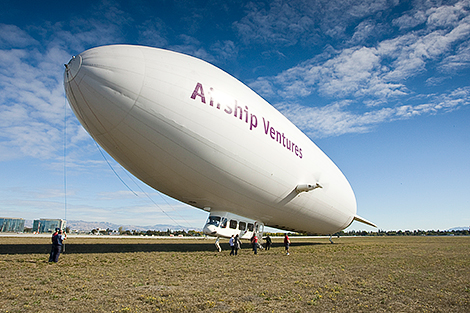 Tours meet on the south side of the airport above the Mercury FBO at the Ristorante daVinci, a popular fly-in restaurant for gourmet Italian cuisine. This is not just a pizza and pasta joint. Think buffalo carpaccio and herb-crusted rabbit paired with selections from the 21-page wine list.

Red Passport Buses service four routes around downtown and to Alamitos Bay, five miles east. On weekends, red AquaBus boats loop around the waterfront hourly, stopping at the Hotel Maya, the Queen Mary, the Aquarium of the Pacific, and Shoreline Village. AquaLink boats service the waterfront and Alamitos Bay. Boat and bus route maps and schedules are available online.

You can easily get around the LA Basin from Long Beach. Board the Los Angeles Metro Blue Line at the Long Beach Transit Mall at First and Pine, two blocks north of the convention center, for connections to Santa Monica, Hollywood, Universal City, Chinatown, Little Tokyo, and Pasadena. 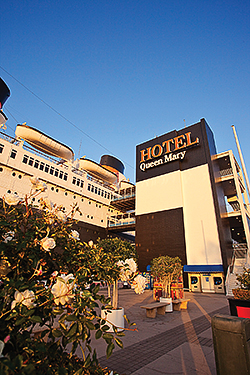 Topped by three red-and-black smokestacks that tower 147 feet above the water, the Queen Mary dominates Queensway Bay across from the convention center. The luxurious ocean liner made 1,001 Atlantic crossings beginning with her maiden voyage from Southampton to New York in 1936, up until Long Beach purchased her in 1967. She is 136 feet longer than the Titanic and cruised at 28.5 knots, making her the fastest ship of her time and the transport of choice for the rich and famous. Today you can tour the ship and see the intricate inlaid wood panels, teak decks, onyx fireplaces, and opulent Art Deco décor that are a testament to a bygone era.

The Queen Mary Hotel offers the luxuries passengers of yesteryear enjoyed, as well as some they didn’t—Wi-Fi and satellite television. Guests check in at the original purser’s desk in the ornate lobby. The ship boasts six restaurants, including the five-star Sir Winston’s Restaurant. Ask for a window table for a waterfront view while you dine on chateaubriand and red wine sauce ($76 for two).

Sunday brunch is served in the Grand Salon, which was once the first-class dining room. Entrées run the gamut from south-of-the-border foods to Asian cuisine to traditional roast beef, with a salad bar, fresh seafood, and extensive dessert choices for $39 per person.

Sailors who served on the neighboring Scorpion had much more Spartan accommodations. This Russian Foxtrot-class, diesel-electric submarine is now moored next to the Queen Mary and available for tours. If you feel claustrophobic squeezing your way through narrow hatches, past pipes, valves, gauges, and torpedoes, imagine 78 crewmembers crammed into this 300-foot-long tube for up to three months at a time. After your tour, stop at the gift shop for authentic Russian military surplus memorabilia or a bottle of Leninade.

The beehive-shaped white buildings along the waterfront west of the Queen Mary are the Hotel Maya. Push your way around the pivoting, 10-foot-tall wood door into the lobby, and take in the eclectic ambiance. Weathered, repurposed wood; colorful Mayan-themed artwork; and Native American baskets add to the décor. The unique design ensures that most of the 199 rooms have water views and balconies.

The on-site Fuego at the Maya serves seafood and Latin American cuisine inspired by Executive Chef Jesse Perez, whose experience reaches from San Antonio, Texas, to Oaxaca, Mexico. It’s worth a visit for sundowners alone. Sip twilight cocktails on the waterside patio while classic movies play and the fire pits blaze.

Pine Avenue and the Pike

Across Pine Avenue from the convention center, the Pike at Rainbow Harbor is a bustling entertainment, dining, and shopping center that rekindles the spirit of the original Pike amusement park of the early 1900s. A Ferris wheel towers over Event Park at the southeast corner. Other entertainment options include a GameWorks arcade, a 14-screen movie theater, and the hip V2O dance club.

“Restaurant Row” along Pine Avenue north of the convention center offers diverse dining options, many with open-air sidewalk seating. Enjoy great seafood at Kings Fish House, microbrews at the Rock Bottom Restaurant and Brewery, or breakfast specialties at the Omelette Inn. Work up an appetite by walking the City Place Shopping Center with more than 40 retailers on Fifth Street between Pine Avenue and Long Beach Boulevard. 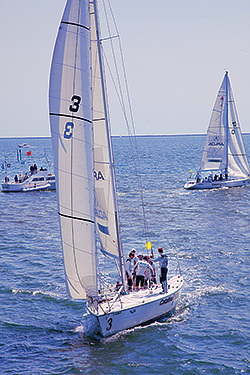 A footbridge over Shoreline Drive leads from the convention center to Rainbow Harbor. Anchoring the western end is Shoreline Park, with its iconic 65-foot-tall Lions Lighthouse for Sight.The pedestrian esplanade wraps around the harbor toward Shoreline Village, a collection of shops, galleries, and restaurants at the east end.

Enjoy a panoramic ocean view at Parkers’ Lighthouse, the seafood restaurant at the end of the boardwalk in the circular, red-roofed building topped with a cupola. The seasonally changing menu features fresh, locally caught selections as well as more exotic delicacies such as Alaskan king crab legs and Hawaiian catches, augmented by produce from local farmers’ markets.

The Aquarium of the Pacific is opposite the lighthouse. Exhibits include 500 species from three Pacific Ocean regions. Colorful fish dart among the coral reefs and camouflaged stonefish are tough to spot in the Tropical Pacific Gallery. A tunnel under the marine mammal pool lets you see sea otters and seals zoom overhead.

To see marine animals in the wild, board a whale-watching cruise next to the aquarium. Blue whale season runs from June through December, followed by the California gray whale season from December through mid-May.

The five and one-half miles of beach east of Rainbow Harbor offer calm waters sheltered by a breakwater. At Wheel Fun Rentals in Shoreline Village, you can rent a bike or roller blades for the paved bike path that runs the length of the beach.

After you pass Belmont Pier on the bike path, head a block north to Ocean Boulevard for breakfast at Chuck’s Coffee Shop. The sign in front touts it as the “Home of the Weasel—Locally World Famous.” Long Beach insiders frequent this hangout for Weasels: plates of fried potatoes covered with scrambled eggs and Chuck’s own chili, then topped with chopped onions and shredded cheese.

It’s less than a mile farther east on the bike path to Alamitos Bay. For a romantic way to explore the bay, let a gondolier serenade you aboard an authentic Venetian gondola with Gondola Getaway. The one-hour cruises ply narrow channels under low bridges and around Naples Island.

For more information on Long Beach, visit the visitors’ bureau website or the chamber website. For special AOPA rates during Summit, book your room online.

Long Beach has drawn aviators throughout its history, and it promises to entertain and amaze as it has for more than 100 years. Bring family and friends to take in AOPA Summit and so much more: waterfront leisure time, a gondola serenade, even stick time in a Zeppelin. It might change your life, as the 1910 Air Meet did for a boy named Jimmy who had just celebrated his thirteenth birthday and saw his first airplane there. You may know him as Gen. Jimmy Doolittle, innovator and hero, but back then he was just a kid heading to Long Beach to indulge his passion for all things aviation.

John Kounis is the editor of Pilot Getaways , a travel magazine for private pilots.