Get the app Get the app
AOPA Members DO more LEARN more SAVE more - Get MORE out of being a pilot - CLICK HERE
News & Media Wx Watch: Super Storms

The National Weather Service’s Storm Prediction Center (SPC) has a great website for looking at some of the supercell variables we’ve just discussed. Just go to the home page and mouse over the “Overview” tab along the top of the chart to see a graphic presentation of the severe weather outlook—which includes superimposed, animated radar imagery. For looking at the storm-relative winds (SR wind) go to the “Mesoanalysis” tab, then click on the chart box corresponding to your area of interest. Across the top of the next view, select the “wind shear” tab, then go to the SR wind levels on the drop-down menu. Click on the altitude you want to study (kilometers, remember), and up come contour maps showing wind strengths—again, with superimposed radar imagery. Arcane? Yes, but good food for the inquisitive mind. Check out the other tabs, like “Basic Sfc” or “Thermodynamics,” for more information. Click on the question marks for explanations of each category. — TAH 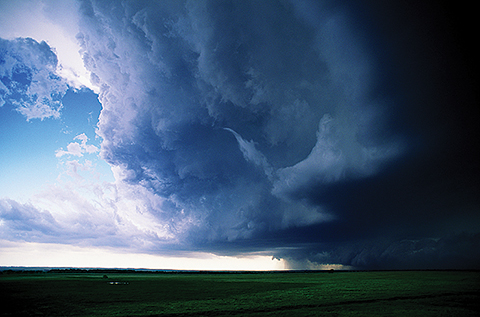 Thunderstorms are must-avoid killers with air currents violent enough to cause structural failure. They’re bad news even if you avoid the parent storm cell, but fly too near to it, as we learned in last month’s article (“ Wx Watch: Outflow Info,” July AOPA Pilot). And although all thunderstorms have outflows, this may be one of the few qualities they share.

All thunderstorms most definitely are not created equal. Every pilot should be familiar with the conceptual model for an “ordinary,” classic, single-cell air-mass type of thunderstorm. This type of storm typically lasts about an hour, and has a three-stage life cycle: the cumulus stage, the mature stage, and the dissipating stage.

The dissipating stage is characterized by downdrafts. These downdrafts end the storm by “choking off” any further inflows. Without inflows, a thunderstorm is deprived of the energy it needs to perpetuate itself.

But what if a thunderstorm could continuously rejuvenate itself by constantly drawing in high-humidity inflows? What if updrafts and downdrafts existed apart from each other, preventing downdrafts from killing storm inflows? If the answer to both of these questions is yes, then you have the setup for supercell thunderstorms.

Supercells don’t occur as often as air-mass thunderstorms but they are much more destructive. They produce a large number of severe thunderstorms, can last as long as four hours, cause nearly all strong tornadoes, create almost all occurrences of hailstones greater than two inches in diameter, and have been recorded as producing lightning rates as high as 200 strokes per minute. Supercells are creatures of the Midwest and central plains states and, not surprisingly, prowl the area known as “Tornado Alley.”

Unlike air-mass thunderstorms, the supercell variety contain strongly rotating updraft circulations, which is why meteorologists classify them as mesocyclones—which in this context means small-scale low pressure centers having updraft diameters of between three and six statute miles. Those are big updrafts! These monster updrafts adjoin strong downdrafts that lie downwind and upwind of the core updraft. These downdrafts continually feed the coexisting updraft. That’s why there’s no downdraft-induced smothering of low-altitude storm inflows.

Conjoining updrafts and downdrafts occur because of strong vertical shear, an important ingredient for supercells. Among plenty of other guidance tools, meteorologists look for the vertical shear gradient in a particular slice of the atmosphere. This is the band from zero to six kilometers (from the surface to about 18,000 feet agl, or 500 millibars on a constant pressure chart). If the winds at 500 millibars are 35 to 40-plus knots stronger than the winds at the surface, then this is taken as one indicator that supercells are likely.

This kind of vertical shear is important for two main reasons. One is that it provides motion for the storm complex. This tilts and separates the updraft from the downdraft columns, and moves the entire system in the process. Vertical tilting of a supercell cloud complex is often taken as an identifying signature, but not all supercells have a pronounced tilt. Any tilting is best observed when flying high in the flight levels—well clear of the storm complex, of course. From that perspective you can see anvil-level (30,000 to 36,000 feet, or nine to 11 kilometers in meteo-speak) clouds angling away from the lower-level clouds, carried downwind by the vertical shear.

Another note about vertical shear: Strongly tilted anvil clouds shedding ice and hail can seed any growing cumulus clouds in their paths. This can create a line of cells that form sequentially in a process called “training.”

This term refers to the direction of the winds relative to the storm complex. A favorable situation for supercells has the winds veering (turning counter clockwise) with altitude. Looking from the top down, that makes for a cyclonic circulation—with a corresponding rotation of the cloud mass. Together with vertical shear, storm-relative winds have a big say in the nature of a supercell.

At the anvil level, weak (less than 40 knots) storm-relative winds mean that any precipitation leaving the top of the storm will fall near the main updraft. That causes precipitation to wrap around the core mesocyclone. The result is what’s called a high-precipitation (HP) supercell. Strong (more than 60 knots) anvil-level relative winds will carry precipitation far downwind, meaning little falls near the core. This creates a low-precipitation (LP) supercell. The classic supercell model falls somewhere in between. On radar imagery, it’s sometimes easy to tell the difference between supercell types. HP cells have heavy precipitation wrapping around the mini-low pressure at the heart of the system; LP storms typically have their precipitation shown as weaker returns downstream. But “weak” is relative. Storm chasers have been inundated by what radar depicted as LP cells.

When scanning your airborne or datalink-provided radar imagery, there’s one signature that should really catch your eye. It’s the “V notch” that marks the most intense part of the supercell’s main updraft, where vertical speeds routinely hit the neighborhood of 115 knots. That’s so intense that no precipitation (including hail) can fall within this zone. Once again, more evidence that steering well clear of thunderstorms is the best policy.

Wall clouds, located near a supercell’s core updraft, have a distinctive shape and are created when the updraft ingests the high-humidity air from the surrounding downdrafts. The air rises, condenses, and presto—a wall cloud. Let’s hope you never see one in person because they are associated with tornado genesis, particularly if there’s a “tail cloud” attached to one.

When a wall cloud descends and begins rotating, trouble begins. It’s one thing if you’re able to see a funnel cloud descending in the relatively rain-sparse rear-flanking downdraft: at least you have some warning. But if a funnel cloud descends in the rain-dense forward-flanking downdraft, you won’t be able to see it. It’s something to remember if you’re ever on a ramp and have a front-row seat to some supercell action. You’ll know when to look for the tornado shelter—if you haven’t already!

Volumes have been written about supercell meteorology, and this has been a simple, bare-bones discussion. I hope it helps you understand a few of the variables that meteorologists check when preparing a convective sigmet.