After canceling the last two races of the year, leaving only this weekend’s Red Bull Air Race in Germany to determine the overall winner for the 2010 series, race officials suddenly announced that all 2011 races are canceled.

The New York Red Bull race was monitored by these FAA officials from the Tetersboro Flight Standards District Office. A day earlier, they had requested one of the pylons be moved to avoid tight turns. A week before this race, Matt Hall had struck the water during a race in Canada after an aerodynamic stall. Had these two inspectors seen a safety problem, they were prepared to call another inspector in the Red Bull Air Race tower to suspend the race.

In past years the race has become a major source of tourism revenue for major cities around the world. It has attracted hundreds of thousands, and in one case, nearly a million visitors total for the practice, qualification, and race days. That success may be part of the problem, said Red Bull race pilot Matt Hall. You can hear an interview he did with a morning talk show in Australia about the race cancellation online. (The interview starts one minute in.)

According to Hall, there has been consideration for a year-long hiatus for some time. The event has “…outgrown its current structure. We’ve been trying to work through the structure and race at the same time,” Hall told radio station 6PR in Australia.

“There’s a lot of things I’m even unaware of. Really, it just got almost to the point where it was getting unmanageable, which was going to lead to safety problems,” Hall said. The feeling was that a year was needed to continue to develop the sport of pylon air racing.

Hall hit the water during a race in Canada in early June, striking one landing gear and a wingtip, but was able to fly back to the race airport despite damage that prevented him from continuing the race. He was then suspended for one race, the one in New York that is featured in AOPA Pilot and Flight Training, because of safety issues. Brazilian pilot Adilson Kindlemann crashed into the water in the Perth, Australia, race this year but was safely rescued. Aircraft race around pylons either floating on a river (most common) or placed on an established land race course. 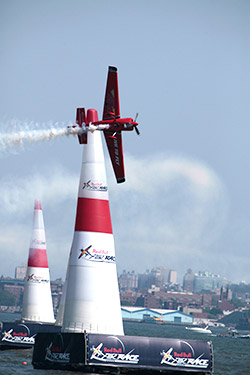 “There’s no safety concerns at the moment, but it was the view that because things have been developing, and the aircraft getting faster which makes the track tighter … there’s a whole heap of things there … before this turns into what could be a safety problem. … It’s easier to have a year to have a look at what is involved … and make any changes that are needed,” Hall said.

Red Bull Air Race officials were also having difficulty with contracts, claiming the last two races this year had to be canceled because contracts could not be completed in time. There also may be a restructuring of Red Bull Air Race senior management.

It is likely that the pilots and their crews will be required to make major safety improvements to their aircraft during 2011, Australian Red Bull race officials said. The changes are designed to protect spectators as well as pilots, and protect the assets of host cities.