Get the app Get the app
Already a member? Please login below for an enhanced experience. Not a member? Join today
News & Media Teachers prepare for school year at AirVenture 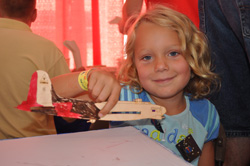 What better way to encourage teachers to inspire their students to learn how to fly than to give them the firsthand experience of flight? Pennsylvania teacher Kathy Foor was rewarded with a free first flight for taking part in the EAA AirVenture Teacher Day July 26 in Oshkosh, Wis. In addition to receiving the gift of flight, Foor also learned several ways she can incorporate aviation into her classroom.

Lyn Freeman, founder of Build A Plane, which hosted the event, spoke to teachers about the importance of aviation in the classroom. General Aviation Manufacturers Association President Pete Bunce and Rep. Sam Graves (R-Mo.) also addressed the teachers.

During the session, AOPA Director of Public Relations Jennifer Storm presented the association’s Pilots and Teachers Handbook (PATH), which provides lesson plan ideas for integrating aviation into subjects like math and science for middle school classes. Each teacher in attendance received one of the handbooks and supplemental materials. Storm also pointed out many of the association’s free online resources, including the Let’s Go Flying website, and the AOPA Air Safety Foundation’s online courses. Additionally, she explained, student pilots can sign up for six free issues of the Flight Training magazine and AOPA membership.

“General aviation is a unique American freedom that should be preserved,” Storm said. “Teachers play a key role in inspiring the next generation of pilots.”

Forth Worth, Texas, fourth grade teacher Rhonda Ingham said the Teacher’s Day provided a “nice way to learn about a number of aviation-related educational resources,” adding that she would share what she learned with her school district's curriculum developer.

Also during the event, the National Coalition for Aviation Education presented the 2010 Crown Circle Award to the Air Force Association and Dean Earl Davis for their performance and outstanding leadership in aerospace education.