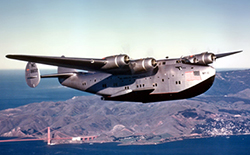 Imagine it is 1944. Four radial engines growl as your giant Pan American Boeing 314 flying boat makes its way from San Francisco to Hawaii. Twelve crew members are required for the 16-hour flight—18.5 hours if the winds are bad. You’re the first officer—or, at least, one of them.

Somewhere below the flight deck an admiral relaxes in deluxe quarters, waiting for an elegant meal. There are no passenger seats on this cargo flight for the Naval Air Transport Service, but quarters for the crew are plush. Admirals and State Department employees make the best of it. Tonight’s flight is cargo but sometimes there are emergency evacuations from Pacific Islands as a result of the war. 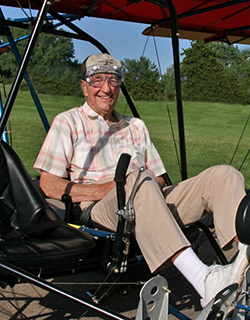 Once he arrived in Hawaii there was a day or two off, then a flight in a Martin Mariner PBM–3R twin-engine flying boat to deliver supplies throughout the Pacific, starting with a 900-nautical-mile run to Palmyra Island Naval Air Station.

Leftwich first got a pilot certificate on his own in 1940 flying a Piper Cub in Indiana. His love of flying survived a midair collision when he was a teenager. When he was six years old, his mother died and he was sent to live with his aunt and uncle in Kansas City. They lived close to the downtown airport, and he spent most of his free time watching the airplanes take off and land. When he was 15, the only thing he wanted for his birthday was an airplane ride, and after much begging, was granted that wish by his reluctant aunt, who made all decisions concerning her nephew. On the evening of Aug. 7, 1932, as he and his pilot were taking off, Mildred Kaufman and her passenger were coming in to land, with the sun setting in front of her plane. As the aunt and uncle watched in terror, the two planes collided over the runway. His pilot pulled him out of the wreckage and all he had was a cut on his forehead. Unfortunately for Mildred, who held the women’s record for continuous loop-the-loops, she died later that night from head injuries. Her passenger survived. He still carries the scar on his forehead from his very first airplane ride, and still has the newspaper article from that day.

After getting his private certificate he joined the Civilian Pilot Training program, repeating much of his earlier training and progressing through aerobatic training in a Waco UPF-7. The flying boat, a term used by its crews, was magical compared to the Waco, he said. One day a letter arrived that started, “Now it is time to redeem your pledge to your country.” It said the airlines needed pilots to replace those headed for the war, and offered a spot for Leftwich at American Airlines. He felt Pan American sounded more glamorous and was allowed to switch. His first assignment was in unglamorous Brownsville, Texas, for training.

Thirty of the students were later sent by Pan Am to San Francisco for flying boat training. “The transition from the DC-3 to boat operations was astounding. It’s just a different world entirely. The transition to flying boats was announced in the office of the pilot in charge of flight training. There were 15 pilots in the office that day. He said, gentlemen, we are going to go down to the dock and we are going to board a Martin PBM-3R. We had no idea whether the Martin PBM-3R was a submarine or a blimp. The purpose was to give an evaluation of a pilot’s performance in an aircraft he had never seen before in his life. We were asked to do a 45-degree bank, and in the process you could be assured the inboard engine would be cut. It was traumatic for some of the boys. Two were discharged as a result of that flight.”

Since Pan American was part of the military service, Leftwich has military medals from his service to the country. The route extended to Brisbane, Australia, and New Zealand.

He continued flying for Pan Am, transitioning through the DC–4 to the DC–6, and ending his career in Germany flying inter-country routes. During that time pilots of the Soviet Union occasionally escorted him with a fighter if he deviated outside 10-mile-wide air corridors because of weather. After such an incident there was endless paperwork to fill out, assuring the Soviets that the deviation was necessary. When not busy harassing civilian airliners, Soviet pilots were busy creating sonic booms to rattle the citizens of West Berlin. 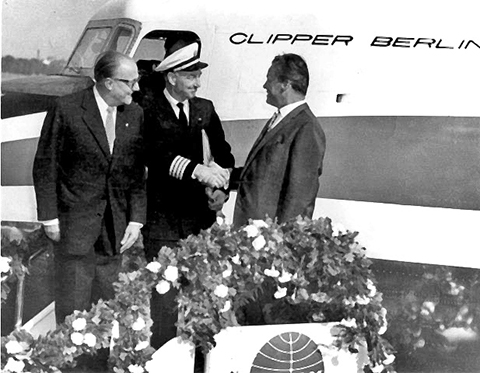 A photo from that time shows him shaking hands with then Lord Mayor of Berlin Willy Brandt at the start of DC–6 service in 1961. In 1977, Lefty retired from Pan Am as a Boeing 727 captain and remained in Germany for three more years.

He later moved to McLouth, Kan., near Kansas City, and bought a Cessna 172. He calls his private air strip “Threshing Bee Airport” because there is an old-fashioned threshing bee next door on the local fairgrounds. 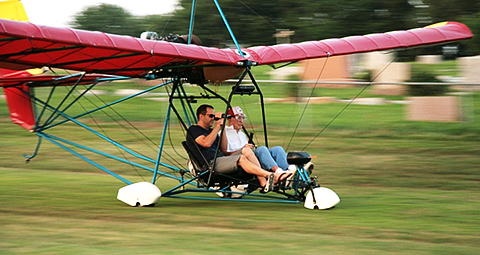 Lefty, on his 93rd birthday, flies with his grandson in a two-seat Quicksilver Sprint.

In August 2010, he announced he was going to “hang it up” and celebrated his ninety-third birthday flying his 34-year-old grandson in a two-seat Quicksilver Sprint assembled by his son. His son is Bill Leftwich, a senior airworthiness inspector for Gulfstream in Savannah, Ga. Leftwich once worked with Phil Lockwood in Sebring, Fla., on the design and manufacture of the twin-engine Air Cam. One of the Air Cams he helped to build was on the July 2009 cover of AOPA Pilot.

Did Lefty really “hang it up” on his ninety-third birthday? After his final flight with his grandson aboard, Lefty reversed his decision to hang it up. There’s still some flying to do.