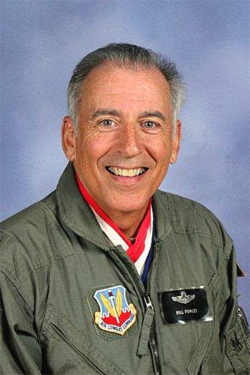 Bill Powley in his flight suit

Orientation flights—more than 4,100 of them over the past 19 years—have earned national recognition for a flight instructor and retired Air Force lieutenant colonel. Bill Powley, of Unicoi, Tenn., conducted most of those flights himself, flying a rented Cessna 172, and initially paid all the costs out of his own pocket.

Powley, a teacher and a mentor to thousands of Air Force Junior ROTC cadets, received the 24th annual A. Scott Crossfield Aerospace Education Teacher of the Year Award from the National Aviation Hall of Fame in July.

After graduating from the U.S. Air Force Academy in 1967, Powley flew F-4s, A-7Ds, and F-16s; he completed 347 combat missions in the F-4 and A-7 and earned the Distinguished Flying Cross—twice—during two tours in Vietnam. He retired in 1991 and started teaching Air Force Junior ROTC that fall at Unicoi County High School in Erwin, Tenn.

To help build an ROTC unit that was on probation, Powley offered to start flying cadets. In April 1992, the school board voted 4-3 to add flying to the JROTC curriculum. “That was pretty gutsy on their part,” Powley recalled. “That’s pretty outside the box for traditional education.”

Initially, funding for the introductory flights came out of Powley’s own pocket. Then he began taking aerial photographs around Unicoi County, where he was flying, and asked for donations of $100 per photo. A magazine article led to a one-time grant from NASA, and more recently annual grants from the Tennessee Aeronautics Commission have helped to sustain the program. With Fain Bennett, he founded FLIGHT—Flight Lesson Instructional Grants Helping Teens—to seek grant money for the program. “The advantage I have is that I’m actually a teacher in the system,” Powley said.

In 1992, Powley moved to Sullivan South High School in Kingsport, Tenn., where he also began a Junior ROTC unit. In addition to more than 4,100 student orientation flights, he has soloed 86 cadets, and has seen a number of students go on to military academies, serve in the military, or become professional pilots.

Over the 19-year period, Powley said, he’s conducted 95 percent of the orientation flights himself, using rented Cessna Skyhawks. “I teach full time in the high school, so most of my flying during the school year is on Sundays,” he said. “If I have a bunch of kids, I’ll find somebody else to get another 172 and help me. 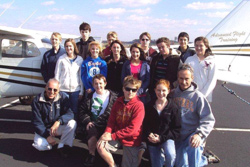 Powley posing with a group of students after giving them orientation flights.

“Sometimes I take time off from school to do the flying, because I don’t have any more free time,” he added; during the week he may fly 24 to 30 students in a session, three per local flight.

Powley takes an average of 700 to 800 students on orientation flights each year. An average of eight trains through solo, and two become private pilots. “I help fund [a small number of private pilots] through the foundation, but I don’t fly them—I get them through solo and then they go with [another instructor] to get their private.”

While most orientation flights are conducted from Tri-Cities Airport, Powley said training for solos generally is done at Greeneville, Tenn., where more economical Cessna 152s are available for rent.

“More than half of those kids have never flown before in their life. That’s a real thrill for them,” said Powley, who makes a journal entry for every passenger. “Many say, ‘this is the neatest thing that I’ve done in my life’ or ‘I’ve never been flying before in my life.’ This is what keeps me motivated.”

One student from another school went for a flight, really liked it, and told his father he’d like to learn to fly. The father said that sounded like fun and that maybe he’d do it, too, Powley recalled. “Both of them got their private pilot licenses together. Over 19 years, a lot of neat things happened.”

Amanda Rice was the first female solo student at Unicoi County High School. “After trying engineering at UT for a year she went to Middle Tennessee State University and became a professional pilot,” Powley said. “Her first job was as a flight instructor teaching Unicoi County JROTC cadets to solo.”

“His exemplary performance as my JROTC commander, my flight instructor, and my ground school teacher resulted in true learning, beyond the walls of the classroom,” said U.S. Air Force Capt. Seth Bennett, an Air Force Academy graduate. “This program affected my life in incalculable ways.”

While encouraging prospective professional pilots is not the program’s objective, it is a benefit. “I’m doing this to help build up the aviation infrastructure in Tennessee, through increased awareness, and for the education benefits. And a few do go on to become professional pilots,” Powley said. 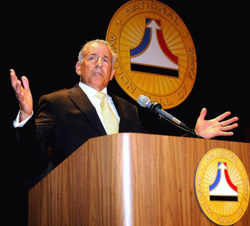 The award, founded in 1986 by famed research test pilot Scott Crossfield, is a juried competition open to current classroom teachers in grades K through 12. Nominations are examined by a review committee of aerospace industry and education professionals. Powley was surprised to learn that he had been chosen. “That blew me away. I do think we probably have one of the more unique programs at any high school in the country,” he said. “I plan to keep doing it as long as I’m healthy and enjoying it. And I’m enjoying it.”

Crossfield, a naval aviator, aerospace engineer, and test pilot, was the first man to successfully fly at speeds above Mach 2 and Mach 3, among many other achievements. He died in the crash of his Cessna 210 in 2006, at age 84.

Although Powley is a team of one operationally, he counts all the people and organizations that have supported the program. “I am privileged and honored to be the leader of this team.”