Get the app Get the app
AOPA will be closing at 2 pm ET on Friday, July 1, in observance of the Independence Day holiday. We will reopen at 8:30 am ET on Tuesday, July 5.
News & Media Rite of &lsquo;Passage&rsquo;: Md. teen flying coast to coast 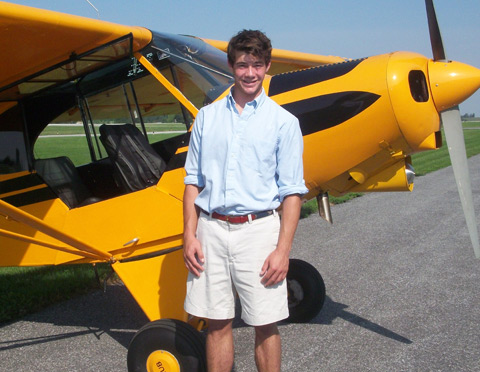 Nate Foster is flying this 1975 Piper Super Cub from Maryland to California.


On Aug. 23, while thousands of Maryland students were trudging back to school, 17-year-old Nate Foster launched on the trip of a lifetime. He is flying a 1975 Piper Super Cub from Maryland to California.

The trip was inspired by Rinker Buck’s autobiography, Flight of Passage. It is the story of two brothers, 15 and 17, who flew a Piper Cub they had rebuilt themselves across the country in the summer of 1966.

The story resonated with Foster. At 17, he is the same age as Kernahan Buck, Rinker Buck’s brother, was as pilot in command of that 60s-era journey. And, like the Bucks, he got his hands dirty rehabbing N7469L under the supervision of family friend Andrew McFall, an A&P with hundreds of hours of pipeline patrol experience flown in Super Cubs in Alaska. They re-covered the airplane’s wings and changed the paint scheme from the original white and red to Piper yellow; put in new upholstery; updated the panel to include a Garmin SL40 radio; installed vortex generators; and replaced the original belly with a metal one. 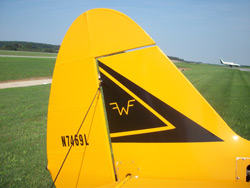 The stylized “W/F” initials on the Super Cub are a salute to Foster’s father, Franklin W. (Whit) Foster.

Foster, of Glyndon, Md., is the son of Franklin W. and Mary Louise Foster. When he approached his parents with the idea, Foster recalled that his father, who flies a King Air for his business in Shreveport, La., responded, “Yeah!” His mother’s reaction wasn’t so much enthusiastic as incredulous—understandable, considering that her son turned 17 in May and passed his private pilot checkride in August, a few days before he was set to leave. But he had done his homework, with much careful preflight planning assisted by McFall.

Foster departed Maryland on Monday morning. He planned to fly to Chicago; St. Louis; Casper, Wyo., Salt Lake City, Utah; Carson City, Nev., and eventually to Monterey. His father will meet him there and fly back with him.

“I’m hoping to get a better understanding of where I am in this country,” Foster said, and added that he looks forward to seeing more of the landscape beyond the Baltimore-Washington, D.C., area.

He’ll return to Friends School in Baltimore on Sept. 1, undoubtedly with more material for a “What I Did on My Summer Vacation” essay than any other student in his class.