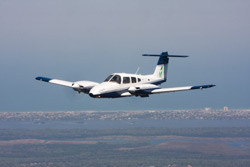 Embry-Riddle has tested Swift fuel in a Piper Seminole.

The Eagle Flight Research Center at Embry-Riddle Aeronautical University in Daytona Beach, Fla., will submit a certification plan to the FAA in October for use of Swift fuel in a Cessna 172 equipped with a Lycoming IO-360 engine. Both the engine and the aircraft must be approved. If approved, the school plans to convert its entire Cessna 172 fleet to Swift fuel.

The move represents the mid-point of a program to receive a supplemental type certificate (STC) for Swift fuel. Early steps involved testing the Swift Enterprises fuel in a Piper Seminole. Those steps are complete, and Swift moved on to additional testing. During initial research at Embry-Riddle, it was found that cold-morning starts are difficult with the Swift fuel. Richard Pat Anderson, director of the Embry-Riddle Eagle Flight Research Center, said the solution is as simple as pumping the throttle. Also, Swift fuel emits a black smoke similar to that seen behind a bus powered by a diesel engine, but the amount is “not objectionable,” Anderson said.

The entire process could take nine months to two years, Anderson said. Embry-Riddle will have as-yet undisclosed research partners to conduct portions of the research. The next steps involve developing the infrastructure for STC testing, then proving both the engine and the aircraft meet certification standards when using the fuel, and asking ASTM for production standards. ASTM members will vote on the standards. If approved, the FAA STC can then be issued.

Anderson sees great urgency in proceeding with an alternative fuel, given that the school has a huge training fleet. The theory goes like this. The EPA has estimated that Daytona Beach International airport has the fifth highest lead emissions in the country. (The estimates are based on the number of piston-engine aircraft, fuel consumption rates, time in each phase of flight, concentration of lead in fuel, and other factors.) Once that estimate is actually measured by monitoring stations now under construction nationwide, local politics take over. If the quantity turns out to be high, local leaders, Anderson warns, might demand changes regardless of what the federal or state governments do.

Anderson attributes the high estimate for Daytona Beach to engine runups by students in aircraft using 100LL fuel. “I think it is important for people to understand that the only fuel with lead in it is 100LL. …In places without industry creating lead, it is likely to be the number one source [of lead emissions],” Anderson said.

The EPA is putting in monitoring stations and will be able to show whether levels of lead at certain airports are unacceptable. (The GA industry is working on changing current specifications to lower the lead content of 100LL, which would help states address potential attainment issues without imposing limits on aircraft use.)