Get the app Get the app
Get the latest news on coronavirus impacts on general aviation, including what AOPA is doing to protect GA, event cancellations, advice for pilots to protect themselves, and more. Read More
Already a member? Please login below for an enhanced experience. Not a member? Join today
News & Videos Flight for the Human Spirit arrives in California 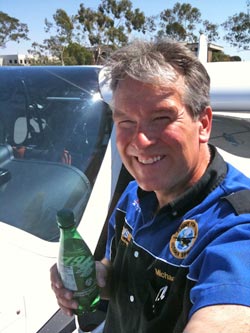 Michael Combs and the Flight for the Human Spirit landed in California last week. Combs, who is attempting to fly in or to all 50 states in a Remos GX light sport aircraft, has now flown coast to coast on the journey that began in April.

Combs and the Remos, which is named Hope One, landed in Victorville, Calif., on Aug. 24, and proceeded to Palm Springs, San Diego, and Redding. This week Combs landed in Oregon and is now progressing toward Bellingham, Wash. The Flight for the Human Spirit will fly north along the coast and then into western Montana. Combs expects to fly into Canada sometime in the next two weeks, and then into Alaska.