Get the app Get the app
Already a member? Please login below for an enhanced experience. Not a member? Join today
News & Media Gulfstream&rsquo;s G650 hits Mach 0.995 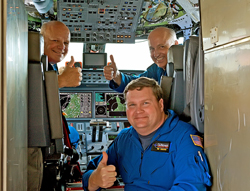 Gulfstream Aerospace’s new G650 reached Mach 0.995 in flutter tests, a feat that prompts the company to dub its top-of-the-line airplane the world’s fastest civil aircraft. The speed was attained as part of the G650’s certification flight test program.

Gulfstream experimental test pilots Tom Horne and Gary Freeman, along with flight test engineer Bill Osborne, pitched the airplane’s nose down 16 to 18 degrees below the horizon to hit the target speed. The maneuver was designed to test the airplane’s natural flutter resistance when the wings, tail, and control surfaces were subjected to vibrations from onboard flutter exciters. The vibration frequencies exerted on the airplane ranged from two hertz (cycles per second) to 58 hertz, or about as fast as a fluorescent light flickers.

The airplane performed as expected. Horne said, “The airplane is very predictable. It’s very easy to control and get precise control at those speeds. The airplane response has matched the expectations of our engineers, and we’ve been able to easily fly the test conditions and march through the test plan.”

The four airplanes participating in the G650 flight test program—which began on Nov. 25, 2009—have completed more than 170 flights and 575 flight-test hours.