Get the app Get the app
Already a member? Please login below for an enhanced experience. Not a member? Join today
News & Media FAA resolves Kings issue

Chief of police apologizes to Kings 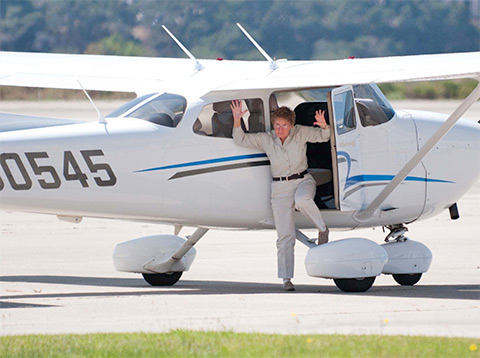 
FAA officials have resolved the lingering issue of listing a Cessna 172S leased to John and Martha King, owners of King Schools, as stolen. The listing caused Santa Barbara police to remove the couple from the aircraft at gunpoint Aug. 28. The N number was once used by a Cessna 150 that remains missing after it was stolen from McKinney, Texas, in 2002. The number was deregistered in 2005 and reassigned to Cessna Aircraft Company in 2009. The Kings' aircraft, first flown by a regional Cessna Pilot Center manager, was stopped by police on its first flight from the factory in 2009.

This is the Texas-based Cessna 150 stolen in 2002 registered with the N number later given to the Cessna Aircraft Company and used on a 2009 Cessna 172S leased by John and Martha King. It was owned by Mike Hance, a Fuji airship pilot who in recent years gave the Kings and John Baker their training as airship pilots. They formed a company called Venus Aviation, and chose that name because they referred to this 150 as their "love machine." It had just been removed from a flying club so it could fly more, and had an overhauled engine. That engine may now be on a Florida airboat, or in an Experimental aircraft without its owner knowing it is stolen. The airplane may have been melted down for the aluminum, a common end for stolen aircraft, Hance said.

An FAA spokeswoman said the number was removed from the list of stolen aircraft, preventing it from being reported again as a stolen plane to the El Paso Intelligence Center (EPIC). That list is the National Crime Information Center (NCIC) database maintained by the FBI. Data contained by the NCIC is provided by the FBI, federal, state, local, and foreign criminal justice agencies, and authorized courts. It is not open to the public.

It was EPIC that reported the aircraft to local police both times it was stopped. The FAA is considering requesting the removal of the N number of a Cirrus aircraft from the stolen list that has a similar problem. It carries the N number of a Piper Arrow stolen in Florida. It is up to local police departments to remove a stolen item from the list when a case is closed. The FAA is considering other measures to prevent innocent people from being stopped at gunpoint in the future, the spokeswoman said. Re-registration of aircraft now planned by the FAA will help improve the identification of the aircraft.

In other developments, Santa Barbara Police Chief Camerino Sanchez has called John and Martha King and apologized "clearly and profusely" for his department detaining the couple at gunpoint Saturday, Aug. 28, Martha King said Aug. 31. "He said that the police don’t have any training for aircraft stops, and used the only procedure they knew--a “hot stop” on a stolen vehicle," King said. Her husband John, co-owner of King Schools, suggested police departments should have national training and a standard operating procedure so they can do aircraft intercepts properly. He will provide the chief ideas on the kind of training police should receive.

“When you are pointing a gun at someone over a long period of time, there is a risk—to us.” John King said. The couple also disagreed with a newspaper account apparently based on comments by city officials saying the couple appeared jovial. John said his philosophy is never to argue with a police officer. The couple tried to be totally correct and cooperative during the time each spent in the back of separate police cars.

Martha said Rep. Brian Bilbray (R-Calif.) would open a congressional inquiry on the incident Aug. 31. Such inquiries usually involve a letter from the congressman to the agency involved, in this case the Drug Enforcement Administration.

“I feel terrible about it,” Santa Barbara City Manager James Armstrong repeated several times during a telephone interview. He noted that as a pilot he has seen the King training tapes and added, “I feel as if I know them.” He said he has seen them at AOPA conventions. Armstrong said the Santa Barbara police approached the situation as they would a “felony car stop.” Felony car stop procedures call for drawn weapons. “They don’t deal with stolen aircraft very often,” Armstrong said. Armstrong provided additional details on how the incident started.

The initiator of the incident seems to be the El Paso Intelligence Center. The center first called police in McKinney, Texas, on Saturday morning, saying an aircraft stolen from McKinney in 2002 was in the air and headed for Santa Barbara, Armstrong said. McKinney police then alerted Santa Barbara police. The Washington, D.C., headquarters of the Drug Enforcement Administration has not yet answered questions from AOPA Pilot. There were indications it may be mid-week before any information can be expected.

Information from a Santa Barbara police spokesman seems to indicate a disagreement on whether an apology was issued at the time of the incident. Santa Barbara police officers say they “definitely” apologized, but the Kings said all they heard was a comment from the police saying they had to handle it the way they did.

The same Cessna 172 aircraft has been stopped one previous time by authorities in Wichita, this time without weapons drawn. Writer Greg Brown reported on the incident for AOPA’s Flight Training magazine. A website by instructor Max Trescott also reported on it. Their accounts indicate Jim Pitman, an employee of Cessna who was based in Phoenix as a Cessna Pilot Centers regional manager, picked up N50545 at the factory in Independence, Kan., and flew it to Wichita. It was the first flight away from the factory for the aircraft, but it was met by police who thought it was stolen. The incident was cleared up in 20 minutes. 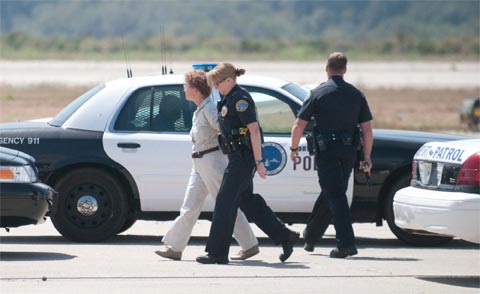 It turns out 2009 was a big year for false detention. Cirrus owner Pierre Redmond was confronted at his Ramona, Calif., hangar by county sheriff’s deputies who were detaining him for a commando-like unit from U.S. Customs and Border Protection. The federal officers had to launch in a Beechcraft King Air from North Island Naval Air Station, San Diego (Coronado Island). When it arrived, four federal agents got out dressed in “…desert khaki tactical gear with bulletproof vests, jumpsuits, and low slung pistols on their thighs,” Redmond wrote on the Cirrus Owners and Pilots Association blog. He thought to himself, “I’ve hit the jackpot,” Redmond now jokes. What they captured was the candy man.

Redmond has a company called Quality Candy Company. He makes King Leo peppermints and Gilliam candy including stick candy. If you have ever been to a Cracker Barrel Old Country Store and Restaurant and have noticed stick candy, he probably made it. It turns out his registration number had once been used by a stolen Piper in Florida whose pilot was cleverly elusive. It took a few hours before the deputies and agents realized, after examining the pilot certificate, medical certificate, airworthiness certificate, and aircraft registration, that Pipers are metal, Cirrus aircraft aren’t.

“We’re all for your efforts,” he told border agents after the incident. (The comment came during one of his frequent trips to Mexico where he has another factory.) “But you’ve got to be able to minimize the impact on commerce, business, and tourism.”

Meanwhile, AOPA President Craig Fuller, in a video interview and a written statement, is calling on the federal agencies involved to solve the N number confusion so that others don’t face the same dangerous situations faced by the Kings, Pitman, and Redmond.