A path worth taking

“Every cloud has a silver lining” sounds like a bad cliché in today’s troubled economy. But the atmosphere for deal making has never been better. 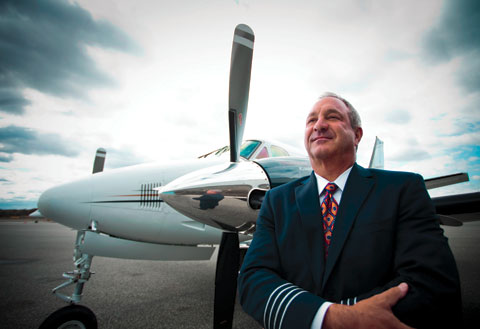 “Every cloud has a silver lining” sounds like a bad cliché in today’s troubled economy. But the atmosphere for deal making has never been better.

Financial incentives for business users of GA with reasonable credit and an ability to use deductions have never been more attractive. Government efforts to stimulate purchasing and place funds in circulation have created or extended attractive tax scenarios for purchasing a new aircraft or upgrading an existing machine (see “ Buying New, Now,” August 2009 AOPA Pilot).

A passion for GA accelerated Bill Goldberg’s decision to retire from his successful medical practice. Avid skiers, Goldberg—a retired cardiologist—and his wife spend a good deal of time in Vermont at their winter home. They summer on Cape Cod. Both locations are not well served by scheduled air carriers, charter options were not appealing, and driving is time-consuming and tiring.

Goldberg’s first aircraft, purchased shortly after receiving his private certificate, was a Garmin G1000-equipped Cessna 182. Then he traded his Cessna for a new Mooney Ovation in order to accumulate retractable-gear time and to experience an increase in performance. The next step was a new Beech G58 Baron, followed about 18 months later by his current aircraft—a new Beech King Air C90GTi. Each step up in performance added measurably to his financial outlays for flying. The King Air’s faster speed meant about 85 percent more fuel per mile than the G58 Baron. Other costs, such as initial and recurrent training, insurance, hangar space, maintenance, and routine servicing, also are significantly more expensive. The annual cost for owning and operating Goldberg’s King Air C90GTi for about 400 hours per year is approximately $250,000.

Cost, while far from insignificant, is only one of several challenges. Goldberg needed to convince an underwriter that he was a satisfactory risk to be insured for at least $5 million in liability coverage. While many insurance companies will offer liability of $100,000 per seat, with total coverage not to exceed $1 million, such low limits are unacceptable for individuals who can afford a turbine aircraft. Furthermore, the factory-new King Air was valued at more than $3 million. Based on Goldberg’s successful, incident-free history with previous aircraft, plus simulator and flight training with FlightSafety International and 50 hours of initial operating experience with a qualified King Air pilot, insurance was issued at a price of $45,000 for the first year of coverage. As part of the negotiations to acquire the new aircraft, Hawker Beechcraft Corp. made several of its pilots available to Goldberg for the few weeks required for him to amass the necessary hours of initial operating experience (IOE).

Goldberg had no difficulty with his King Air pilot initial training. His knowledge of the G1000 provided an excellent basis for adapting to the King Air’s Collins ProLine 21 avionics. Other systems, however, were not similar to the Baron’s.

Managing the King Air C90’s Pratt & Whitney Canada PT6A-135A powerplants is significantly different from handling the normally aspirated Continental IO-550-C engines that power Baron G58s. Procedures for starting the turboprops are more involved, and considerable care must be taken to monitor the start sequence to prevent a costly over-temperature situation. Unlike the Baron’s recips, the King Air’s PT6As also require careful pilot attention during the initial application of takeoff power. Whereas the Baron G58’s throttles can be advanced to their forward stops without concern for over-boosting the aircraft’s engines, PT6A power levers must not be positioned fully forward, since doing so is likely to exceed the torque—and possibly temperature—limits of the turbines.

Engine management on starting and takeoff, as well as in emergency situations where prompt application of full power is needed, demand a more disciplined piloting technique than is typically required with the Baron G58. Goldberg noted that a fair amount of simulator training was spent familiarizing students with engine techniques, especially for starting and applying power.

Goldberg finds the King Air’s handling qualities similar to those of his previously owned Baron, but flight planning is considerably different. The increased capability and flexibility of the King Air present considerably more options, such as whether to file IFR and take advantage of the aircraft’s performance at altitudes above FL180, or select 16,500 feet or 17,500 feet to enjoy more efficient routing when departing the area west of New York City. He also noted that the wider performance envelope, particularly with respect to altitude, presented new weather issues, such as icing—even in the summer months. On the other hand, the ability to fly higher provides a better view of weather such as embedded thunderstorms that would not normally be seen visually when operating an aircraft below 10,000 feet.

In concept, the Internal Revenue Code is clear: Only companies or individuals with legitimate business requirements for an aircraft can claim deductions for depreciations and expenses. All costs, from acquiring the asset to operating the equipment, must be ordinary and necessary to the functioning of the business. The company must be designed to make a profit, which must be demonstrated (usually by earning a profit three out of every five consecutive years in business).

If the company appears to be a hobby masquerading as a business, the IRS aggressively disallows claims for deducting expenses and depreciation. While an owner may fly his or her company’s aircraft for personal travel some of the time, at least 51 percent of the aircraft’s use must be for verifiable business purposes; only those expenses that were incurred during IRS-acceptable business use can be deducted from income.

Particularly in today’s economy, when scheduled airlines are reacting to diminished passenger demand by curtailing service to numerous cities throughout the nation, many companies and entrepreneurs are able to make a solid case that acquiring a business aircraft is an ordinary and necessary business expense.

To make the most of his investment in a new King Air C90GTi and also to be eligible for favorable tax treatment of costs, Goldberg needed to create a business that required an aircraft. Certainly a viable FAA Part 135 on-demand air taxi company, successful in generating income, was an answer that the IRS should accept. And that is precisely what he did, forming Sunnyfield Aviation.

Working with a specialist in the field, Goldberg prepared the appropriate credentials and demonstrated compliance to the FAA within a few months of taking delivery of his new C90. Approved by the FAA and his insurance underwriter to serve as chief pilot and captain, he hired a co-pilot and has since added several other aviators to Sunnyfield’s certificate.

“Business is booming,” said the cardiologist turned chief pilot. “We advertise in local publications with success as well as regionally with the Air Charter Guide, and now we have a number of repeat customers—businesses with travel needs the airlines can’t meet, as well as individuals who wish to make discretionary trips. Our customers like the service, our professionalism, and our attention to detail, and they appreciate the fact that they can travel in a new aircraft at the same cost charged by other King Air providers, which typically employ older aircraft.

“My experience with general aviation is like life itself—truly the unfolding of an unplanned yet highly rewarding journey. I’m in the middle of that process path, with much to look forward to. Someday I would like to run a larger flight department, or possibly manage additional aircraft.”

To others like Goldberg who appreciate the benefits of general aviation and can see the opportunities that exist even in this challenging economy, the journey is both exciting and rewarding.

John W. Olcott is the former president of the National Business Aviation Association.