Get the app Get the app
AOPA Members DO more LEARN more SAVE more - Get MORE out of being a pilot - CLICK HERE
News & Media Answers for Pilots: Charitable flying 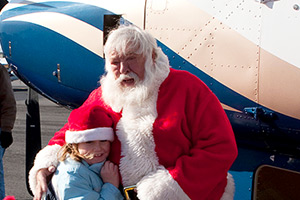 Whether there are snow-laden evergreens or sun-streaked palm trees outside our windows this month, the holidays beckon us to our homes to enjoy the company of family and friends. As we reflect on our blessings, many pilots decide to give back some time and aviation experience to benefit the needs of others. Participating in charitable flight activities is a rewarding way to get engaged in the community and help a worthwhile cause while doing something we love.

AOPA’s Pilot Information Center receives many calls from members asking how they can sponsor a community flying event. Typically, these pilots want to provide sightseeing flights at local airports to raise funds for civic groups, churches, or youth groups. The fundraiser is usually a big success, and in addition to raising financial support, many participants are introduced to flying and camaraderie is built between the community and the airport. It’s a win-win scenario.

A few years ago, in 2007, FAA revised the rules for these kinds of events by creating a new section of regulations, FAR 91.146. These rules apply only to airplanes and helicopters— not to gliders, or balloons. There are specific eligibility requirements for the pilots, the aircraft, the airport, the sponsor, and the event, itself. Here is a summary of what’s involved in organizing charitable or community sightseeing flights:

Setting up the event

The sponsor must send a letter to the FSDO describing the event at least seven days before it’s scheduled. The letter should include: The name of the sponsor, the purpose of the charitable event, the date, time, and location of the event, and all prior events in which the sponsor participated during the current calendar year. In addition, the FSDO should have a photocopy of each pilot in command's pilot certificate, medical certificate and logbook entries showing that each pilot is current in accordance with 61.56 and 61.57 and has logged at least 500 hours of flight time. Each pilot must sign a statement listing all prior events in which he or she has participated during the current calendar year.

The flights can only fly in VFR conditions. The pilot must take off and land at the same airport and remain within a 25-mile radius of that airport. For you thrill seekers—sorry, but no aerobatic or formation flights are allowed. The pilot must give a thorough safety briefing before each flight. And one more thing—if the flight is likely to overfly a national park or tribal lands, the sponsor must have a letter of agreement from the FAA.

Although you may suspect that the Grinch, himself, had a hand in construing the intricacies of the regulation, it’s ultimately in the interest of safety, and it’s worth the hassle to set the event up right. You’ll be glad you did when you hear the children’s delighted whoops and see the grins on the grown-ups as the airplane climbs into the sky above their neighborhood and they see it from heaven’s perspective for the first time.

Interested in finding out more? AOPA is hosting a Webinar on Charitable Flying on Thursday, December 16 from 8:00 - 9:00 Eastern Time. Plan to join us by signing up online.

Happy holidays from AOPA to each and every one of you—and best wishes for a blessed New Year.