Get the app Get the app
News & Media Avionics overkill?

An aerobatic airplane gets an IFR panel

The idea of making a single-seat aerobatic airplane into an IFR platform seemed dubious from the start. My Vans RV–3 is designed for maneuverability, not stability. 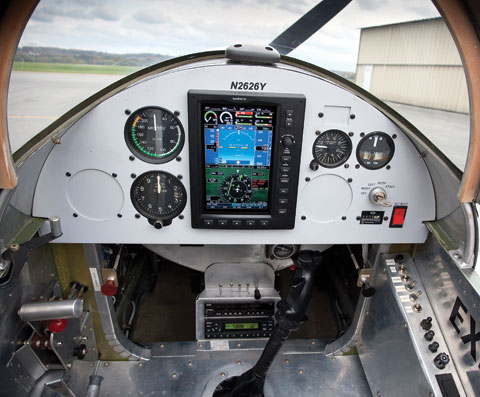 The idea of making a single-seat aerobatic airplane into an IFR platform seemed dubious from the start. My Vans RV–3 is designed for maneuverability, not stability. It only has one seat, and both panel space and electrical current are in very short supply. A smart owner would keep such an airplane light and simple and fly it only on sunny days.

But I’m not that guy.

The RV–3 offers good speed, range, and efficiency, and from the time I bought it and ferried it from Salt Lake City, Utah, to Atlanta, Georgia, I’ve always liked going places in it. Since moving to the Mid-Atlantic three years ago, however, it’s rare to be able to fly very far in any direction without encountering clouds, complex airspace, or both. And in those situations, it sure is nice to have the option of going IFR.

Also, an entirely new class of Experimental avionics has come into being since the RV–3 was designed in the early 1970s (and my airplane was built nine years ago). These light, robust, glass-panel inventions make it possible for even small airplanes with severely limited panel space and electrons (my airplane has a mere 12-amp alternator) to carry safety enhancements such as synthetic vision, satellite weather, onboard traffic, standby power, and LED lights. And instead of loading the airplane down with extra weight, the new gadgets could actually make the aircraft a few pounds lighter by replacing heavier electromechanical gauges.

Prices do not include installation.

I was getting close to a decision when David Buckwalter, founder of Avionics Systems LLC in Leesburg, Virginia, pushed me over the edge. At Sun ’n Fun in Lakeland, Florida, he sketched out a new panel that would make my RV–3 IFR legal—include satellite weather, traffic, and terrain—and avoid major airframe or electrical modifications.

His shopping list included a Garmin G3X PFD/MFD, SL30 nav/com, and GTX 330 Mode S transponder; AeroLED strobe and nav lights; and a TCW standby battery. The total retail price was about $20,000, including roughly 40 hours of shop time for installation. It seemed absurd to put that much money into an airplane with a total insurance value of $35,000. But it would also make the RV–3 much more versatile and give it capabilities comparable to those of airplanes that cost orders of magnitude more.

I gave Buckwalter the green light, and he performed the work in two stages: First he installed the G3X and AeroLED lights—and once that was done, I was so pleased with the results that I considered halting the project right there. The PFD/MFD with synthetic vision and satellite weather gave me the information I needed to avoid bad weather, and the exceptionally bright, synchronized LED lights made the tiny, 800-pound airplane far more visible. When I was on a four-mile final one hazy afternoon and the tower controller reported seeing the lights of my airplane, I was ready to declare victory.

But I’d also had enough close encounters in the busy East Coast airspace to want a Mode S transponder that could display traffic on the G3X. And if I took that step, I might as well follow through with the nav/com for ILS and VOR approach capability.

The final piece of the puzzle for IFR flight was redundant electrical power. Buckwalter concluded the lightest and simplest addition was a 2.5-pound TCW battery with a built-in connection to power the PFD/MFD for at least 90 minutes in case of an alternator failure or electrical outage.

The project was finished in October—just in time for the morning fog and low clouds that autumn brings. After getting acquainted with the new avionics and flying a few practice approaches in VFR conditions, it was time to fly in the clouds and see if the new equipment would actually bring added utility.

I filed a flight plan to nearby Martinsburg, West Virginia (28 nm); took off on a rainy, overcast morning; and was soon cleared for the ILS approach to Runway 26. The RV–3 doesn’t have an autopilot or wing-leveler, and holding a heading and altitude while tuning radios and scanning an approach plate is devilishly difficult, much more so than I expected. But as soon as the green localizer needle appeared on the HSI, centering it and tracking it along with the glideslope could be done with precision. After several ILS and VOR approaches, I headed back to Frederick, Maryland, for an uneventful ILS approach to a full-stop landing.

The strange thing about the IFR RV–3 is that the panel looks sparse compared to the standard six pack it used to contain, and synthetic vision makes the experience feel like VFR flying.

At 10 miles you “see” the airport—or at least a colorized, GPS-derived representation of it—on the PFD screen. From the final approach fix to touchdown, you “see” the runway and your path to it. Obstacles appear, as do notable terrain features such as hills, lakes, roads, and rivers.

Traffic shows up, too, with colored symbols that denote threat levels. The TIS system gets its information from ground-based radar, and the FAA has announced, regrettably, that it is doing away with it. But Garmin has assured GTX 330 buyers that the transponder can be made compliant, eventually, with the future ADS-B system (by providing ADS-B “out”), so that takes away some of the sting.

The RV–3 is never going to be the right tool for hard-IFR flying, especially in this part of the world, since it lacks anti-ice equipment, pitot heat, a windshield defroster, or an autopilot. But the avionics upgrade greatly enhances situational awareness and adds safety features that give peace of mind in both instrument and visual conditions.

As much as I’ve questioned the avionics overkill this project represents, at least I’m in good company. Other sport airplane owners are installing even more elaborate panels, and at the rate things are going, mine may soon seem primitive.