Head of the Class

Grooming the next generation of pilots

Where will we find the next generation of pilots? That’s an oft-debated topic at airports and pilot lounges around the nation. Today’s kids care more about video games; airports aren’t easy to find and explore; young people lack the self-discipline of their parents and grandparents.

The PATH to aviation education 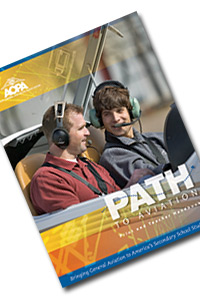 Aeronautical concepts can be interwoven throughout nearly every subject. (Think of the science of weather, the mathematics required to calculate weight and balance, and you get the idea.) AOPA understands the importance of teaching young people about aviation. That’s why the association offers PATH—Pilots and Teachers Handbook, which connects math, science, physics, history, and technology with general aviation. This book, designed especially for pilots and secondary school teachers, enables them to bring their passion for aviation to the classroom. Pilots can use it to plan a special presentation or a school outing to an airport. For teachers, the 11 easy-to-follow modules highlight common questions about general aviation and include activities that can be tied to classroom topics. To request a hard copy or download a printable .pdf file, see the website. —JWT

Where will we find the next generation of pilots? That’s an oft-debated topic at airports and pilot lounges around the nation. Today’s kids care more about video games; airports aren’t easy to find and explore; young people lack the self-discipline of their parents and grandparents. At least that’s what the naysayers claim.

So where are our new pilots-to-be? In many parts of the country you need look no further than local high schools, where aviation programs—some modest, others elaborate—are channeling their students’ passion, getting them out to the airport and even into the air.

The four schools profiled here are not an exhaustive list, but a sampling of what’s happening in aviation education. Coupled with countless chapters of organizations such as the Aviation Explorers and the Civil Air Patrol, and first-flight efforts by the EAA’s Young Eagles program, schools around the country are helping to produce first-rate students of the sky. 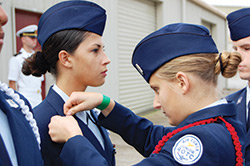 The GA-friendly state of Florida is an appropriate location for a garden to grow pilots. The city of Lakeland is home to both the annual Sun ’n Fun Fly-In and a new aviation-themed high school.

The Central Florida Aerospace Academy (CFAA) opened in 2009 with 63 ninth- and tenth-graders attending classes in trailers behind the Florida Air Museum on the Sun ’n Fun grounds. But the trailers won’t be around much longer. In April the school announced that a $7.5 million grant from the Aviation Education Foundation (AEF) will be used to build a 58,000-square-foot facility, and purchase furniture and equipment.

“Teaching young people the discipline required to learn the science of flight builds character and confidence,” said AEF founder James C. Ray. “The experience of solo flight teaches them that they are independent and free-thinking individuals who are fully capable of being in control of their own lives.”

CFAA is expanding its focus to include all four high-school grades, according to Chad Smith, assistant principal of curriculum. Enrollment may reach 500 when the new building opens in August 2011.

Structured as a career technical school, CFAA challenges students to excel in science, technology, engineering, and mathematics. “Ultimately, your goal is to get some sort of certification,” depending on the field of study, said Smith. Students who choose an aerospace concentration work toward passing the private pilot knowledge test. Those who aspire to be airframe and powerplant technicians typically won’t complete that certification in high school, but CFAA is partnering with four-year and community colleges to offer dual enrollment for college credit.

Flight training will be offered through a student flying club that is being developed. The new facility includes space for a hangar and flying club, and airplanes are being purchased, Smith said. “It won’t be part of the school system but strictly dedicated to students of the academy,” he said. Students will be able to do volunteer work in exchange for flight time. 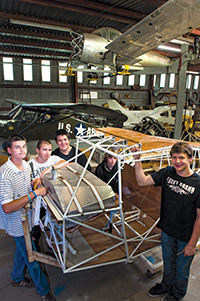 Flabob Airport Preparatory Academy is located on Flabob Airport, which was built in 1925. Students put in book and classroom time, and also the sweat equity of helping to restore classic and antique aircraft through a partnership with the Wathen Foundation. Thomas W. Wathen believes aviation is a powerful stimulus for learning mathematics, science, technology, and engineering.

“They are immersed in the world of aviation,” said Principal Kathleen Swift. Students have restored a Stinson 108-3, a Stits Skycoupe, and an Aeronca Champ; those who brought the Champ back to life got to fly it to Oshkosh for EAA AirVenture in 2009. Others designed and built a wind tunnel that will ultimately be shared with the Planes of Fame Museum in Chino, California.

Under the River Springs Charter School, Flabob is structured as an independent-study school and does not charge tuition. Students attend classes three days a week, with two days of home study. Many complement their high-school classes with community college courses. They study traditional academic subjects with aviation integrated into the curriculum. They can earn reduced-cost flight training at the airport by working on restoration projects; four hours of volunteer work earns one hour of flight instruction (at $15 per hour).

“Being located on an airport has tremendous advantages for us when it comes to students who are nuts about airplanes,” says Swift. In 2009, the school conducted a field trip to watch the Flabob Express, the foundation’s DC–3, take flight. “You should have seen the looks on students’ faces when they finally saw that airplane fly—especially the ones who had been giving it spit and polish for the last year or two!” 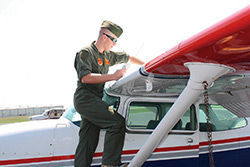 South Texas can get oppressively hot in July and August, but that doesn’t deter the hundreds of young people who come to Harlingen each year to attend Marine Military Academy’s (MMA) summer camp—part of an aerospace elective offered by Sabre Aviation’s Air Wing under a contractual arrangement. The Air Wing also offers “flight encampments” for 14-to-18-year-olds, and they can solo if at least age 16. “They fly every day, they get ground school, they live in the quarters in the academy,” said Cadet Ryan Reed, an 18-year-old certificated pilot. During the summer, campers flew some 680 hours and 1,158 sorties. The camps have become so successful that some who sign up eventually enroll in the academy. Their flight education doesn’t stop there. The Air Wing offers an integrated flight training program that propels its participants to private pilot status and beyond.

MMA is a college preparatory boarding school for young men in the eighth through twelfth grades that is operated on the traditions, values, and ideals of the U.S. Marine Corps. Tuition plus room and board is about $30,000 per year. The school offers two aerospace tracks in which students can pursue private pilot certificates, instrument ratings, or commercial/CFI. All flight training is conducted at Harlingen Airport. A training fleet consisting of Cessna 172s and a 182 are housed in an 18,000-square-foot hangar that the wing shares with United Parcel Service. The wing has its own maintenance officer, and each instructor is allocated an aircraft rather than flying whatever is booked for that day.

“The instructors are top-notch,” said Cadet William Hasbrook of Canyon Lake, Texas. “The airplanes are backed by a room of simulators for when the weather is bad. The simulators are also used to brush up on flying skills at a lower cost.”

“Some flight instructors will fly in most conditions within the safety boundaries because many flight instructors are striving to get hours, but we don’t do that, because the Air Wing doesn’t consider that productive” for the students, Reed said. Students fly weekdays after their academic school day has ended, and on weekends. They must maintain good grades to fly. When a student solos, he earns a unique call sign that is displayed on his flight suit, and every achievement thereafter earns a patch for the suit.

MMA has had an aviation elective for more than 20 years. Contracting with Sabre Aviation’s Air Wing in 2009 brought renewed student interest in the elective. Before the wing was established, an estimated 5 percent of the students received flight training; for 2010/2011 that figure is an estimated 20 percent. 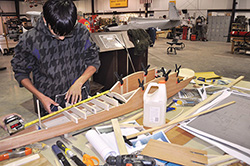 A Piper Tomahawk mounted on a pedestal in front of Polytech High School started out as two Tomahawks. They were rescued from an aviation junkyard, and students assembled an entirely “new” airplane out of the hulks. It was a cooperative school-wide project: Masonry and welding students built the base and pedestal; drafting students created a drawing; automotive students put in an engine for counterbalance; auto painting decorated the fuselage, and aviation students assembled the aircraft itself.

Polytech’s aviation program is one of many vocational education offerings within the technical school, whose total enrollment is 1,190. The program turns out a steadily increasing number of students who graduate with a private pilot certificate—a source of pride for Senior Aerospace Science Instructor John Plummer and Aerospace Instructor Dan Lettieri, who base their curriculum on that of the Air Force Junior ROTC. “We support [students’] goals for both civilian and military” careers, Plummer said. “We’re not trying to make everybody an air force fighter pilot. I’m trying to find their fit and their passion for everything.” Graduates of the program have continued on to the U.S. Air Force Academy, the U.S. Military Academy, and public and private universities.

“We typically graduated one or two seniors a year with a private pilot certificate, federally funded with a Perkins grant,” Plummer said. “This is no longer the case.” Five graduates earned their certificates in the spring of 2010. Six juniors and one sophomore entered ground school in the 2010-2011 academic year, and another 15 sophomores have expressed interest in earning a private pilot certificate, he said. (Students use freshman year to explore the career options that the school offers before choosing a track.)

Past hands-on projects have included the Tomahawks and construction of an ultralight. Plummer is negotiating with the Dover Air Force Base Aero Club for a surplus wind-damaged Cessna 172 that students can take apart and rebuild. Students can take flight training at almost no cost through a contract with the nearby aero club. The school has federal grants to pay for the training; students pay $25 per month for club dues. Plummer encourages students to get as much training as possible—and to complete at least the private certificate. “We will continue to produce private pilots before they graduate high school,” he said.