We had many memorable flights during a trip to Alaska in the summer of 1976. The adventure, from Boston to Alaska and back in a Mooney, began on a whim. 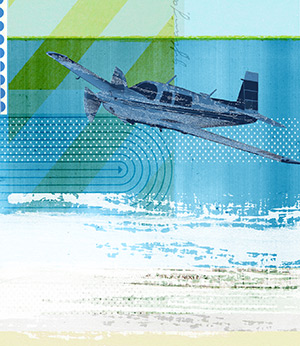 We had many memorable flights during a trip to Alaska in the summer of 1976. The adventure, from Boston to Alaska and back in a Mooney, began on a whim. Ivan, one of my two partners in the airplane, and I had instrument ratings but were relatively inexperienced pilots. He and his wife-to-be, Susan, flew the Mooney to Anchorage, and I met them there.

We flew around Denali (Mount McKinley) on a CAVU day that was nothing short of spectacular; landed at Homer during an earthquake (5.9 on the Richter scale) centered close to Kodiak Island, causing us to bounce down the runway; flew over Kodiak Island the next day, responding with awe to the size of giant Kodiak bears on the western part of the island; and landed on a mountaintop in Kotzebue and in Eskimo villages along the Yukon River. But the “Never Again” flight took place on the way to Bethel, in the far western part of the state.

It began innocently, with our enthusiasm for the trip. Local pilots were more than a bit leery of our plans to fly all over the state—they understood the flight conditions in their regions and didn’t venture widely without good weather.

The state of Alaska is enormous, with a land mass more than twice the size of Texas. Our planned trip to Bethel was certainly more than many would want to undertake and, as it turned out, one we wish we hadn’t attempted. The weather was pretty good, with the possibility of instrument conditions close to Bethel. We decided to file VFR and pick up an IFR clearance en route if the conditions dictated.

We departed Anchorage in good VFR conditions through Merrill Pass and up to 10,500 feet in smooth air. We could even see a tanker ahead and above us that seemed to be going to Bethel as well. About an hour into the flight, the tanker, which was clearly faster, suddenly got swallowed up by clouds and disappeared. We were still in the clear, but getting twitchy about talking to Anchorage Center to pick up our IFR clearance. So we did and not a moment too soon, as the cloud layer was getting lower as we flew west. There were no VORs to cross-check our position, so we estimated.

The air was smooth in the clouds and our airplane was running great at first, but soon the rpm started to drop and we were losing altitude. We suspected carburetor ice and tried to combat it with carburetor heat and full power, yet we still couldn’t maintain altitude.

Anchorage Center said to maintain 10,000 feet, but we told them we were unable. They said to maintain 9,000, but that didn’t work either. They instructed us to maintain 8,000, but we were still descending. There was no radar coverage in our area and no VORs to cross-check our position. We were getting scared.

Anchorage asked what altitude we could maintain. We told them that we were unable to maintain level flight, and that we were slowly descending through 6,000 feet. As best we could tell, our airplane was covered with ice. We had no forward visibility and a very limited view from the side windows as we continued going down. We had maximum power and were hanging on the prop at about 65 KIAS. I was just trying to keep the wings level and the stall horn silent. Ivan was looking at a sectional chart and trying to assess our position relative to the surrounding terrain. We were beyond the highest terrain and over a part of the state we thought was fairly flat, without any significant towns or population centers.

We were surprisingly calm and focused on getting out of our predicament. We decided that we would try to lower the gear at about 1,000 feet agl and make a controlled, blind crash landing.

We had maintained heading and were still flying toward the Bethel VOR, and then we crossed over it. Reviewing instrument procedures well ahead of time can really pay off, and we hit the jackpot on this occasion. As soon as we crossed the VOR, we slowly turned to the outbound heading for the VOR Runway 19 approach.

There was no control tower, so we announced what we were trying to do on the common traffic advisory frequency. We were barely nudging the airplane into an outbound turn while continuously descending, desperately hoping we could get through a procedure turn and come back inbound before running out of altitude. As we turned inbound, there was a loud bang and then another, which nearly paralyzed us. We realized that the outside temperature had climbed above freezing, and ice was coming off the prop and hitting the windshield and tail.

The windshield defroster gave us a slit of forward visibility, and through it we could see the runway. The wheels came down, and then we were on it. We literally ran out of altitude and our controlled crash was on the runway.

We were stunned, shaking, ecstatic. My legs were so wobbly that I could barely step out of the airplane. We slipped and fell off the wing and had to stay down on the tarmac to keep from falling down—and our little Mooney was an ice cube.

In retrospect, we did not get a complete weather briefing, and we were flying with only minimal instrumentation into a remote part of the state in questionable weather conditions. We could have and should have turned around at the first sign of icing and returned to the good weather behind us. We did not have to get to Bethel that day—or any day.

With the hindsight that more than 30 years can bring, I know now that we were impetuous, dangerously overconfident given our level of experience, and disrespectful of the vast expanse and fickle weather of our most northern state.

Herbert T. Abelson, AOPA 532527, is a commercial pilot with multiengine and instrument ratings. He has been flying for 37 years.