Get the app Get the app
Already a member? Please login below for an enhanced experience. Not a member? Join today
News & Media One pumped-up powerplant

Whew! After a hunt lasting two months, we finally found our 2011 sweepstakes airplane. The Crossover Classic-to-be is a 1974 Cessna 182P; it lived at the Middletown, Ohio, Regional Airport (MWO) and belonged to Thomas C. Wortley, a local businessman. As a restoration project, this airplane is near perfect, with just 1,754.6 total hours on the airframe, long-range fuel tanks, a recently overhauled engine, and an original Cessna/ARC instrument panel, with two exceptions: Garmin¿s GMA 340 audio panel and SL30 nav/com.

Keep up-to-date with your Sweeps plane

Stay in touch with future developments in the Crossover Classic’s transformation. Stop by the website for photos and blogs, and stand by for the next step: a complete overhaul of the Classic’s instrument panel. With each stage in its completion, this project gets more and more ambitious.

Last month, our 2011 Crossover Classic sweepstakes saga left off with the airplane’s arrival at Air Plains Services—a conversion shop based at the Wellington, Kansas, airport. Chief Photographer Mike Fizer and I flew our newly purchased 1974 Cessna 182P from Middletown, Ohio, to Wellington—where the airplane’s original, 230-horsepower Teledyne Continental Motors O-470 engine would be swapped out for a factory remanufactured, 300-horsepower Continental IO-550D powerplant. 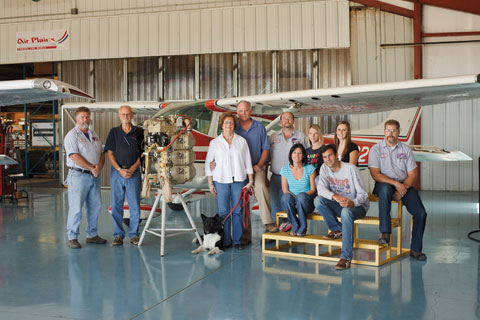 The engine replacement would be a big job, but additional work would keep Air Plains’ 10 employees busy for the following four weeks. As daunting as the work may seem, Air Plains has been specializing in these sorts of conversions since it was established in January 1977. It holds supplemental type certificates (STCs) that allow it to install several engine and auxiliary fuel tank upgrades to Cessna 172s (1961 to 1986 models), Cessna 180s (1953 to 1981 models) and Cessna 182s like ours (covering the 1965 to 1986 model years).

“We used to just do the IO-520s under our earlier STC,” said Air Plains Vice President Carolyn Kelley. “But in 1994 a doctor in Montana brought his 182 here—and he wanted the bigger IO-550. So we picked up the STC to do that conversion, and now that has taken over in popularity with the 180s and 182s.

“The IO-550 is a great choice,” said Kelley. “It gives customers extra power, and the engine fits nicely. We don’t have to do any modifications to the cowling.”

The IO-550 lends itself to the precise fuel measurement provided by General Aviation Modifications Inc.’s GAMIjector system, which was installed on our engine. GAMIjectors are fuel injectors designed to replace standard fuel injectors, and they’re precisely tuned for each cylinder. This keeps fuel flows and cylinder head temperatures balanced and allows a near-perfect fuel/air mixture ratio. Using GAMIjectors, lean-of-peak cruise operations are possible—with the help of all six of our new electronic engine analyzer’s cylinder head temperature probes.

Most Air Plains customers don’t stop with the engine conversion. The company does a brisk business bundling Flint Aero’s 12-gallon-per-side tip tanks and JP Instruments electronic engine analyzers into the deal; Electronics International’s engine analyzers can also be ordered. We chose the JP Instruments EDM-930 single-screen engine and system analyzer for the Crossover Classic. We liked its large screen and crisp color display. The EDM-930 has the additional advantage of serving as legal replacement fuel gauges. This meant that we could toss the original Cessna gauges and use the 930 instead. Fine by me.

Air Plains has a large share of the Cessna-single upgrade market. To date, it has performed 1,700 Cessna 172 conversions, 100 Cessna 180 engine upgrades, and some 500 Cessna 182 conversions like the one we’re having done. The price of the 182/IO-550D upgrade is $66,000—which includes a factory-remanufactured engine. The Flint Aero tip tanks are $7,700. These make good bargains for owners of those thousands of older Skyhawks and Skylanes who want to pick up as many as 20 knots in cruise speed—as well as two or more hours of endurance.

When AOPA refurbishes sweepstakes airplanes—especially one that’s 36 years old—we won’t go halfway. It makes no sense to simply replace an engine, for example, and then neglect engine accessories. Who wants a 30-year-old alternator? Exhaust system? Baffling? Propeller? Propeller governor? Not us! 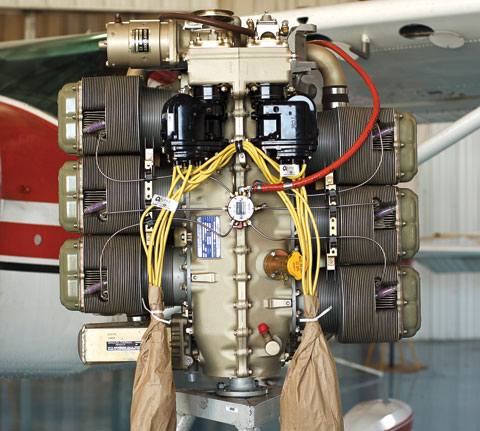 Fortunately, our generous project partners came through with an impressive array of components. The new baffling from Airforms Inc. of Big Lake, Alaska , is a work of art. All black, with nice, flexible new seals, the metal on these baffles is even powder coated! And, of course, they beat the original baffling hands down.

Hartzell’s three-blade propeller and McCauley’s new propeller governor are proven ideal matches with the IO-550D, which explains why Air Plains prefers them. We’ll soon see if our new engine/propeller combination can push the Classic’s cruise speeds to the 160-knot mark.

Plane-Power Ltd.’s lightweight alternator will replace the original, and it’s a welcome addition. It puts out more power at low rpm, puts out less heat, keeps on producing its rated power at high altitudes, and weighs four pounds less than the stock alternator. All these attributes will become very important in a very short time. Why? The Classic will have an all-electronic cockpit, centered around its Garmin G500 avionics and L-3 Trilogy standby instrument system.

The Skylane’s fuel caps will be heading for the trash can. Back in the early 1970s, when the Crossover Classic-to-be was manufactured, the fuel caps of many Cessna singles did not sit flush with the wing when secured. The result: Water could pond on top of the caps. Opening the caps would inevitably allow collected rainwater to fall into the fuel cells, and if the cap seals weren’t tight water could leak through them. Either way, it meant water in the fuel. A service bulletin was issued urging the replacement of the caps, but compliance was not universal.

To remedy our fuel-cap situation, Hartwig Aircraft Fuel Cell Repair is providing its Monarch fuel caps. These caps have an umbrella-style design that ratchets closed. Water can’t get in the fuel tanks. Hartwig has sold more than 5,000 sets of its Monarch caps since 1987.