Get the app Get the app
AOPA will be closed July 4th, in observance of the Independence Day holiday. We will reopen at 8:30 am ET on Tuesday, July 5.
News & Media Proficient Pilot

The other day I read an article by Ross Detwiler in the October 2010 edition of Business & Commercial Aviation. The article conveyed a concept so simple in principle yet so profound in potential benefit that I immediately decided (at the risk of appearing plagiaristic) to pass it along to readers of this column. 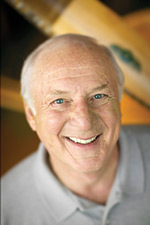 The other day I read an article by Ross Detwiler in the October 2010 edition of Business & Commercial Aviation. The article conveyed a concept so simple in principle yet so profound in potential benefit that I immediately decided (at the risk of appearing plagiaristic) to pass it along to readers of this column. The concept has to do with the manner in which a pilot prepares to combat a suspected or reported wind shear on short final approach, especially the decreasing-headwind type of shear that can quickly rob a pilot of critical airspeed.

Most pilots attempt to counter a conventional wind shear (not one generated by a microburst) by simply increasing airspeed. But by what amount should airspeed be increased? As Detwiler points out in his article, pilots can increase their normal approach speed by half of the gust factor, all of it, the total headwind component, or something else. Instead, he suggests a procedure taught to U.S. Air Force pilots. This procedure instructs pilots suspecting a wind-shear encounter on short final to maintain a groundspeed equal to the airspeed normally used on final approach.

What? Maintain groundspeed and not airspeed? This might initially sound like heresy, but let’s back up for a minute and review what happens during a wind-shear encounter. What at first blush sounds absurd is both logical and reasonable.

Assume that you are flying an airplane with a normal approach speed of 80 knots, and you note from your GPS that groundspeed is 50 knots, the result of a 30-knot headwind component. The tower clears you to land and adds that previous aircraft have reported a 15-knot airspeed loss on short final because of wind shear, the result of a sudden change in the direction and/or speed of the headwind component. What needs to be emphasized is that although flying through the shear obviously results in a 15-knot loss of airspeed, groundspeed will remain essentially the same because of aircraft inertia. In this case, airspeed will decrease from 80 to 65 knots during the wind shear but groundspeed will remain at 50 knots.

The U.S. Air Force teaches pilots anticipating the possibility of a wind shear on short final approach to increase groundspeed so that it is the same as the airspeed normally used on final approach. This means that in the example cited above, the pilot would increase airspeed so that groundspeed is 80 knots. Airspeed before the wind-shear encounter, therefore, would be 110 knots. Now assume the worst-case scenario: The wind shear is of such a magnitude that the entire headwind component disappears, the maximum possible wind shear. Groundspeed would remain the same after such an encounter, 80 knots in this case. The minimum airspeed that would result also is 80 knots, which is exactly the same as the indicated airspeed normally used on short final.

The pilot could accomplish the same thing by increasing airspeed by an amount equal to the headwind component that exists prior to the wind shear. The problem is that pilots often don’t know the headwind component when crossing the outer marker, for example. The easiest way to accomplish the same thing is to simply increase groundspeed to match the desired and normal final-approach airspeed. In this manner, it would be impossible for airspeed to decrease below that which is normally desired (even if the wind shear consisted of a sudden loss of the entire headwind component).

In this manner, a pilot encountering a substantial wind shear on short final is prepared for it. All he would have to do upon experiencing a sudden loss of airspeed would be to arrest the sink rate by raising the nose and adding a little power, something that would be relatively easy to do because of the airspeed surplus available prior to the encounter.

One concern might be excess airspeed when crossing the runway threshold. Won’t this increase the runway distance required for landing? No. It is touchdown groundspeed, not airspeed, that determines landing distance. So even though airspeed might be higher than normal, groundspeed will be same as when crossing the boundary using a normal approach airspeed under no-wind conditions. This would be true even if the pilot did not encounter the anticipated wind shear and landed with all of the airspeed added in anticipation of a wind shear.

There is one problem to be considered when crossing the threshold with excess airspeed and that is the relatively nose-low attitude of the aircraft required to fly a faster-than-normal approach. This can be handled in one of two ways. The first is to simply enter a prolonged flare to dissipate excess airspeed (provided that there is sufficient runway to do so safely). The other is to gently “roll” the mains onto the runway and be aware that the nosewheel might be touching down at the same time (because of the nose-low attitude). Caution is required here to avoid wheelbarrowing down the runway. This can be avoided by holding back pressure on the control wheel after touchdown and braking very gently during the initial phase of the rollout.

On the other hand, if a wind shear is encountered as anticipated, the pilot will not have such excessive airspeed, and he will have survived the experience to fly another day.

Whether you adopt this procedure or not is, of course, up to you. It is presented here only for your consideration.