Get the app Get the app
News & Media What It Looks Like: Heated brakes

The approach was icy, and after landing you notice that you’re taxiing in slush. So far, so good.

The approach was icy, and after landing you notice that you’re taxiing in slush. So far, so good. But after parking in subfreezing temperatures, the story changes for the worse. That slush has frozen solid to the main gear brake disc assembly. You won’t be going anywhere until that icy mess has melted. It’s a problem that may not affect those who spend the winter months flying in lower latitudes, but operators in the northern tier of states often face this situation when adverse weather affects ground operations.

That’s why some manufacturers provide heated brake assemblies as either standard or optional equipment. You can tell if an airplane has heated brakes because there will be an insulated, flexible hose snaking down the main gear legs, ending with a manifold that directs the heat toward the brakes.

The heat comes from engine bleed air. In Hawker Beechcraft King Air cockpits, the pilot flips a Brake Deice toggle switch on the ice protection panel to the On position, and a solenoid control valve lets the heat flow. The high-temperature, high-pressure air comes from one of the turbine engine’s compressor wheel stations, then is routed down the landing gear. 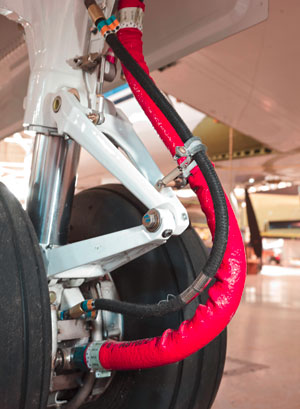 Using bleed air for brake deicing can cause big outflows from the engine—so much so that time limits may be posted for its use on the ground, lest the heat cause damage. In the King Air, for example, brake deice heat is the single biggest user of bleed air. And because engine bleed air is needed for other systems, using brake deice can cause problems. On the ground, if brake deice is in use and the pilot simultaneously cycles the inflatable wing deice boots (which also use bleed air), a Bleed Air Fail warning may flash on the annunciator panel. That’s a big hint that way too much bleed air is leaving the engines.

A King Air’s rudder boost system—yep, it senses drops in engine bleed air to identify a failing engine—is another system that can be compromised by using brake deice. With most bleed air flowing to the brakes, there isn’t enough bleed air pressure left to sense a difference in engine bleed air output. That can be a real problem in the critical moments after takeoff, should an engine choose that time to act up.

Standard procedure is to use brake deice during taxi and takeoff if it’s absolutely necessary. King Air systems put brake deice on a 10-minute timer when the landing gear is in the up position. The idea is to dry the brakes completely, in preparation for the next landing, without causing too extensive a draw on the ship’s total bleed air requirements. Check your airplane flight manual for the specifics on your airplane’s brake deice system. —TAH