Get the app Get the app
AOPA will be closed July 4th, in observance of the Independence Day holiday. We will reopen at 8:30 am ET on Tuesday, July 5.
News & Media What to expect when you step up

What to expect when you step up

A primer on how turboprops beat pistons

Turboprop airplanes are simpler in some ways than pistons, although the environment in which turboprops operate opens up a whole new world of requirements and knowledge. And then there’s the complexity of the machines themselves in terms of systems. 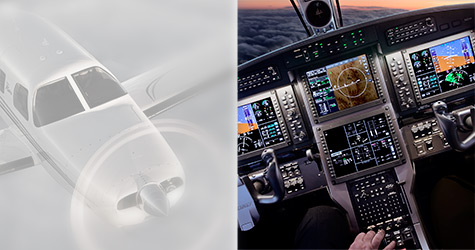 Turboprop airplanes are simpler in some ways than pistons, although the environment in which turboprops operate opens up a whole new world of requirements and knowledge. And then there’s the complexity of the machines themselves in terms of systems. Mothers-to-be read What to Expect When You’re Expecting. Here’s a condensed look at what to expect when you begin dealing with turboprop engines.

Turboprops greatly expand the operating envelope by allowing you to comfortably reach the flight levels without changing too much in the overall handling department compared to pistons. Many turboprops are based on earlier piston designs such as the Beechcraft King Air (with its Queen Air and Twin Bonanza roots), Piper Cheyenne (Navajo), and Cessna’s Conquest I (Cessna 421), which means they fly pretty much like their piston-powered forebearers. Like their ancestors, most turboprops are great for getting into and out of shorter runways, so you’ll be able to continue using smaller airports.

Turboprop engines behave like both normally aspirated and turbocharged piston engines. Experience with both will help you feel comfortable with the turboprop airplane. Like normally aspirated piston engines, turboprops lose power as you climb. Turboprops, though, can typically hold their power to higher altitudes because they are purposely overpowered, and then flat-rated to a specific shaft horsepower (shp).

For example, each engine in a King Air C90 GT is capable of producing 750 shp, but it is flat-rated—or operationally limited—to 550 shp. On takeoff from a low-altitude airport, redlines on the torque meter, which is used to measure power output on many turboprops, will stop you from going above the 550-shp limit.

Turbocharged piston engines operate similarly. They are able to make more power at sea level than they are rated for, so redlines on the manifold pressure gauge keep pilots from asking too much from the engine. Often density controllers and automatic wastegates help prevent over-boosting.

As the turboprop climbs, the torque will fall off, but the pilot can keep adding power until the engine becomes temperature limited as read on the interturbine temperature (ITT) gauge. At that point, ITT becomes the limiting redline, and as you continue climbing, power will fall off just like a normally aspirated piston engine. It’s the same with a turbocharged piston engine: During the climb, power will drop off, but it can be recovered until the wastegate closes completely. If you continue climbing after that point, power will drop off—just like a normally aspirated engine.

One of the good things about most turboprops is that they can get down in a hurry. Just pull the power levers back to idle, and don’t worry about keeping the engines warm—there are no cylinders to shock-cool. Many turboprops can descend like a stone, unlike most complex singles and light twins. Exceptions to this rule are some Garrett-powered turboprops.

For all the added capability, the penalties of a turboprop compared to a piston airplane are the high cost of the engines and their overhauls, and a fuel burn at least double that of comparable piston airplanes. Other negatives are uneven spooling of the engines during power changes (in multiengine airplanes) and delayed response compared to piston engines’ instant reactions. You also will experience new systems: Pressurization, deice boots, hydraulics, oxygen, and limited AC electrics all are items that may be new to piston-airplane pilots. In turbine equipment, bleed air powers pressurization and boots rather than turbochargers and vacuum pumps in piston airplanes, and it’s a more reliable source of power.

Pete Bedell is a first officer for a major airline. He holds type ratings in the BAe Jetstream 41, Canadair RJ, and Boeing 737.